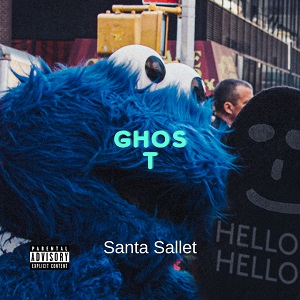 A slow, creeping bassline peppered with melancholic keys gives a nod to listeners pressing the play button on “Ghost – Freestyle” this summer season, and although just an intro to the track, the first couple of moments we have with this new song from Santa Sallet are significant nonetheless. There’s something defiantly somber about the way this song opens up to us, and yet I don’t feel like the lyrics extend the same elegiac wit to the audience at all.

On the contrary, there’s a confidence behind the verses that doesn’t exist for them melodies in “Ghost – Freestyle,” and when combined in this tight arrangement, the contradictions tell a story of their own. I love the lyrical depth a rapper like Santa Sallet can bring to the table in the right circumstances, but this is the sort of single that puts the moodiness of his material at the center of the spotlight rather than any specific poetic narrative. This is a player with skills we haven’t been paying much attention to, but he sounds more than a little determined to do something about that in this performance.

Freestyles don’t usually feel as pressurized both sonically and from an execution standpoint as this one does, but then again, I don’t think that most freestyles have as lusty a collection of themes as this single does. Santa Sallet deliberately skews the instrumental minimalism with a powerfully down-tuned vocal style here, teasing both the audience and the bassline with unrealized passions only ever alluded to in his delivery.

The arrangement brings to mind the retro trip-hop stylings of a late-90s British underground, minus the percussive whimsy so much of that era produced on both sides of the dial. Sallet’s rapping is constantly tense and uncomfortably relaxed next to the beat, but I think this needs to be the case for us to appreciate the juxtaposition he’s trying to establish in this track. It’s stacked compositionally and cosmetically, which is rather impressive when stripping away his presence and realizing how simplistic all of the elements in “Ghost – Freestyle” really are.

It’s easy to be a picky rap fan these days given the tremendous amount of talent that the American underground has enjoyed in the past ten years in particular, but if you’re looking for something off the FM radar but still very worthy of some mainstream love, Santa Sallet’s discography is where it’s at. “Ghost – Freestyle” is a showcase that lives up to everything its title might and confirmedly implies, and being that I already wanted to hear a complete album from his camp sooner than later, this taste of his 2021 sound has made me more curious about a proper release date for any upcoming LPs featuring his skills.

This isn’t a genre that any credible artists can afford to drag their feet within, and if you ask me, Sallet has the kind of ability that shouldn’t be put on the shelf for a second. There’s more to exploit here, and I think that’s evident from every angle in “Ghost – Freestyle.”