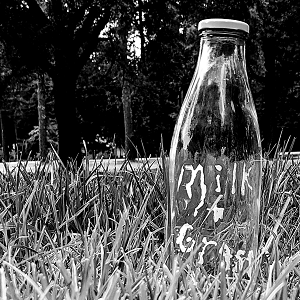 There’s not a lot of oomph to the opening bars of “People Around,” the first track in Webster’s Wheel’s new album Milk & Grass, but for all this song lacks in rhythmic energy it makes up for in warm tonal goodness the likes of which are a rare commodity anymore. The vocals intertwine and make a melodic patchwork as speckled with humanizing faults as it would be a symbol of folk harmony perfection, and the guitar strings don’t echo into an abyss of reverberating silence like an empty bottle chucked into the ocean. Intimacy is pivotal to our understanding and appreciating songs like “People Around,” “Love Ye One Another,” and “Country Peepers,” all three of which could have come together to make quite the teasing EP all on their own.

“Dogs Don’t Cry” really struck me as a guarded work of poetry the first time that I sat down to hear Milk & Grass over the Independence Day weekend, but its unwillingness to be emotionally exposed just might be its most endearing quality. There’s an earthiness to the lyrical hesitance it wears so fetchingly beside the blunt ironies and optimisms of “Day Like Today” and “Swooned Up,” but it doesn’t feel like the only example of Webster’s Wheel refusing to hold back from the audience in this piece. Even when they’re melodically festive, the moodiness of the rhythm – not unlike the landscape that inspired it – is unpredictable and impossible for us to turn away from once we get started in this tracklist.

“Over There the Wind Blows” seems like it wants to be more of a throwback to scattered, searching folk sound of a midcentury Americana than it actually can be, but with the melodic wit it throws in our direction, the framework becomes less important beside the substance of the performance we’re witnessing. Milk & Grass’s title track is deceptively complicated due to the breakneck tempo at which the players can rattle it off, but the beat in this song is what drives up the unspoken tension first introduced to us in “Dogs Don’t Cry” some four tracks earlier. It’s clear we’re coming into a big climax, but the fierce presence these musicians have remains unchanged from A to Z.

Milk & Grass concludes with the thoughtful “Growin’” and smothering “Hollow Hands,” both conflicting with the relatively fundamental song structures that precede them in the LP. It’s as though Webster’s Wheel have intentionally waited until we’re at the foot of the Promised Land to inform us that we really haven’t seen everything they can do just yet; that their odyssey towards creative nirvana is nowhere near complete, but in fact just reaching a point of significance to both followers and observers this July. Call me crazy, but I think this a far more conceptual effort than any critics are probably going to give it credit for, and if it’s giving us any sort of a sneak preview into what Webster’s Wheel have in store for the next installment of their discography, I wouldn’t plan on seeing them lose ground in the industry and among their peers anytime soon.