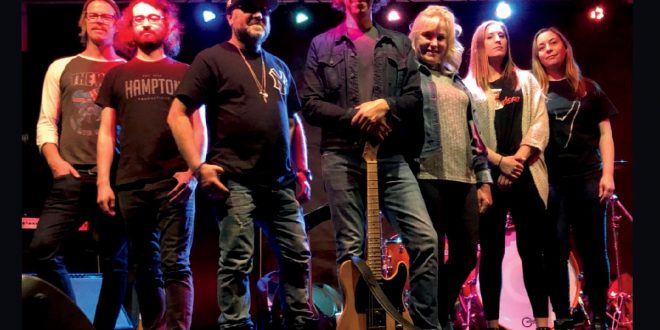 In their new extended play, appropriately titled 100% Cool, rockers JD & the RetroRyders don’t waste our time with a cerebral intro or any sort of pomp and prestige unbecoming of a true rock band – they jump right into the fire with “If It’s Out There It’s Mine.” Loaded with juggernaut riffs and an optimistic vocal harmony that essentially sets the tone for the whole of the tracklist, “If It’s Out There It’s Mine” was definitely the right pick to kick this record off with a bang. “Destiny,” the song that immediately follows the opening salvo of string play, is just as much of a charmer, and in some ways it offers us a slightly deeper look into the scope of what this band is all about.

While “Destiny” is a feel-good throw down of epic proportions, it doesn’t have quite the homespun feel that “When She Cries” does. Though I wouldn’t call this track a ballad, it’s definitely the most plodding song on the EP. The rhythm of the percussion is made to deliberately conflict with the fluidity of the guitar and vocals, but rather than yielding an experimental discord, it creates viable chaos that JD & the RetroRyders manipulate into genuine melodicism. They’re not breaking the mold with their application of alternative compositional techniques in 100% Cool, but they’re definitely bucking any mainstream trends with the incorporation of aesthetics that, for the better part of the last two decades, have been relegated to content found left of the dial.

“Real to Me” sparks up a little bit of Americana in the midst of the traditional rock n’ roll revelry in “When She Cries” and “Rock n Roll Now,” but the song doesn’t feel like a total departure from the overall theme of the material in 100% Cool at all. JD & the RetroRyders can wear a lot of different looks, and whether they’re fronting a rough-edged heartland rock sound in “Real to Me” or cutting into something a little punkier in “Rock n Roll Now,” they don’t sound like a band desperately trying to find their own unique style of play. They’re comfortable being the flexible crew that they fashion themselves as in this record, and that makes them quite the interesting study this June for sure.

JD & the RetroRyders finish us off with the lusty “So Far So Good” before bringing us across the finish line in 100% Cool, and though this record clocks in at around twenty minutes in total length, it doesn’t feel like a limited glimpse into who its players are for a second. Rock does best when it’s kept simple and pure, and in this new extended play from JD & the RetroRyders, there isn’t anything synthesized or artificial to come in the way of artists connecting with their audience. I admire their moxie, especially given the quiet time for the rock n’ roll genre (relative to what we’ve seen in previous decades), and with any luck it will spread to their contemporaries in the underground and mainstream alike.