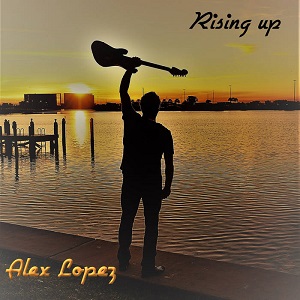 Alex Lopez has built a considerable following and critical reputation since his 2013 recording debut, His latest release Rising Up is an eleven song collection highlighting Lopez’s increasing songwriting finesse, guitar prowess, and the top-notch cadre of musicians complimenting his artistic vision. The Xpress is more than capable accompaniment; they are active collaborators who help bring each of Rising Up’s tracks to vivid life while demonstrating a level of empathy for the material only a few musicians can match. It is apparent from the first track on that he’s found the right players for what he’s attempting to achieve.

He mixes his typical bluesy firepower with a variety of textural experiments with jazz-influenced tracks among other unexpected turns. Kudos are deserved for any artist who has carved out a recognizable niche yet feels compelled to venture afield of their comfort zone. “Light It Up”, however, is an assertive and sinewy musical experience punctuated by Lopez’s able guitar playing. He uses his rough-hewn voice well here and elsewhere on the release and the guitar pyrotechnics are typical of his approach – fueled with enough high-octane six string gymnastics to collar your attention but never falling into excess.

“Paradise” chugs along at a steady yet muscular pace. The organ simmering beneath the slide guitar and drumming gives the track additional heft while never copping a heavy-handed approach. It’s another track, as well, that’s ideal for Lopez’s voice. He has a steady oush on the lyrical content from the outset and packs a lot of relish into his phrasing. The title track is a hardboiled guitar rock gem. It moves fluidly despite its sharp edges and doesn’t pull any musical punches. It’s definitely one of the album’s marquee numbers and comes at a good place in the track listing,

The freewheeling piano counterpointing Lopez’s jazzy guitar inflections during “I’m Always Wrong” is the musical highpoint of the piece. The relaxed fatalism of its lyrics marks it as a different sort of composition than what we’re used to from performers in Lopez’s vein, but it nonetheless boasts cool charm and the aforementioned piano and six-string parry with tasty results. “Even Up the Score” is another dyed in the wool blues rock cut interspersing intense fiery lead playing amongst strong riffing. Lopez gives the commanding and lightly threatening lyric added bite thanks to his singing and the Hammond organ touches throughout this track contribute a lot to its overall burn.

“Blues in My Groove” has some distinct R&B/soul overtones despite its title. The fleet-footed grind the Xpress achieves during this performance provides one of the album’s more entertaining musical rides. Alex Lopez concludes Rising Up on an upbeat note with the love song “Smile”. It’s powered by a straight-ahead march-like tempo with occasional flare ups; the drumming controls much of the finale’s dynamism and there’s some eloquent melodic guitar lines laced into the song’s tapestry. Lopez’s songwriting and musical allegiances are a throwback, for sure, but he understands the value of pouring old wine into new bottles.

User Rating: Be the first one !
Share
Previous Dova Lewis – Self Titled (EP)
Next KINDERCROWDCONTROL