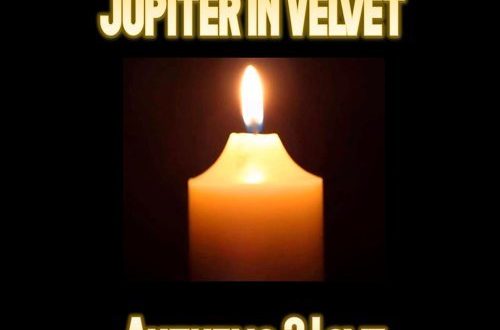 Anthems 2 Love by Jupiter in Velvet

Anthems 2 Love, the latest record from Jupiter in Velvet, starts amidst waves crashing on a deserted beach somewhere in “A Cooler Shade of Mad,” hinting at the distant surrealism that will be a theme throughout the next five tracks that come after this opening cut. A fuzzy guitar and a pumping rhythm soon adorn the oceanic backdrop and force their way out of the silence and into the spotlight, but their aggressive tonality is the only assaultive element in play here. Everything in “A Cooler Shade of Mad” is built around a carefree swing and a smoking vocal from Jupiter in Velvet, and though what follows in “If Not Peace… (Then it’s War)” is a bit more complicated, this first song is essential to setting the mood.

“If Not Peace… (Then it’s War)” is a guitar-lover’s dream, with the master mix emphasizing the texture of the strings above everything else that is present. The lyrics are affectionate and anti-egomaniacal, but they’re not what really drives this composition. Instrumentally, Anthems 2 Love is a big record for Jupiter in Velvet, as he abandons the main style of verse that he was using before now in songs like this one and “Stand Up,” which is another track as in love with its own guitar worship as it is a black and white pop hook. There wasn’t any overthinking going on in the recording sessions for this EP, and if there was, you’d never know it from hearing these first three songs.

“The Greatest Gift” is the only track on Anthems 2 Love that sounded a little stock to me, but that could be because of the song that follows it in “Forever & a Day,” which I felt made the second half of the record the real prize to behold here. “Forever & a Day” has a mad beat that I haven’t been able to get out of my head for a while now, and though its guitar parts could have been ten-times harsher and still have made a perfect melody with Jupiter in Velvet’s voice, they don’t underwhelm in this recording at all. No expense was spared here, and if you think that I’m referring to finances alone, you’re in for quite the surprise when you drop this onto your turntable this December.

Anthems 2 Love concludes with the short and sweet “We Are All One,” which brings the EP across the finish line in a beautiful acoustic harmony that, while standing apart from the tone of the other material on the record, does a lot of bring us full-circle at the end of the tracklist. Jupiter in Velvet has been flying under the radar of a lot of mainstream audiences in the last few years, but I think that he’s got a lot to look forward to in 2020 beyond the realm of the American underground beat. He gives us a sensuous glimpse into the future here, and with his enduring command of the studio, I think his next full-length is going to be even more powerful (if not a bit more) than this sophisticated sampler disc is.