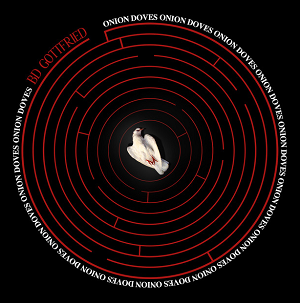 BD Gottfried’s musical journey has allowed him opportunities to share the stage with several important musicians. He’s played on the same bill as former Uriah Heep and Lone Star frontman John Sloman and bassist extraordinaire Pino Palladino, among others, and has established himself as one of the preeminent indie vocalists and composers working now. His new album Onion Doves is a sprawling thirteen-song set that shows, without question, Gottfried has ambition to burn and doesn’t shy away from fraught subject matter.

He wraps up such moments, however, in musically pleasing vehicles. The album’s first cut “Truth, Such a Rarity” tells you by its title alone that Gottfried’s point of view has a profound impact on his songwriting. It sounds like he may be strident and preachy when the lyrics are neither. His piano playing is the center of everything going on musically with this song and he does a great job juxtaposing it against his voice.

Sequencers, keyboards, and synthesized guitars are critical pieces in the architecture of these songs. Tracks such as “Comic Book Messiah” depend on it more than most. While it doesn’t drain all the life out of the material, however, the onus does shift onto Gottfried’s shoulders alone to elevate the song. A significant portion of the fun listening to Gottfried’s music is hearing early on how the success or failure of his song essentially lives and dies with him alone.

“Onion Doves” is musically “heavier” than any of its predecessors. Gottfried slows things down compared to earlier songs and it gives the performance extra weightiness without ever becoming ponderous. This is especially notable when you consider the album’s reliance on electronic percussion. Siegfried Meier’s production is effective throughout the release, but few songs gain more from his approach than the title number.

One of Onion Doves’ most physical performances, “Romancers of the Dark” has a raucous synthesizer thrust driving the song forward. Some listeners may regret that the song’s wall of sound muffles much of Gottfried’s singing. “Three Stories High” shares superficial similarities with the earlier “9th Line Beauty”, but deviates in several key respects. The mood of the former is more unsettled.

“Earth and Air” expresses Gottfried’s environmental concerns. It doesn’t address the issue in a high-handed way but, instead, seizes upon the same poetic veneer that other socially relevant tracks do. Much of the music recorded for Onion Doves may not have sounded out of place in the late 1980s or early 1990s, but the song’s lyrical concerns are often ultra-modern and speak about existential threats facing us all.

Harley Olivia’s backing vocals never overshadow Gottfried’s voice but, instead, underline the lead vocal. The song is ideal for a music video. The promotional clip included with the song’s release certainly spells out its underlying concerns with its frequent incorporation of footage such as oil wells, out of control wildfires, dead whales, and more. You can make a strong case that “Earth and Air” is the album’s finest song. It’s far from its only great track. Onion Doves is practically bursting with great songwriting.

User Rating: Be the first one !
Share
Previous Arun O’Connor “Too Far Gone” (SINGLE)
Next Vikki Sota “Run Up My Bands” (SINGLE/VIDEO)