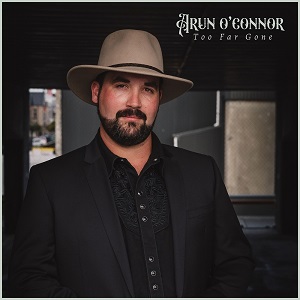 “Too Far Gone”, the first single from Arun O’Connor’s debut album Music from the Reading Room, blows the doors open for the New Zealand-born singer/songwriter. The son of New Zealand music legend Dave O’Connor  It’s a vital and full-throated songwriting experience from a guy who practically has music bursting out of him these days after shying away from songwriting until recently. He’s released a few singles preceding this but “Too Far Gone” is different because it is part of a bigger work while being a fantastic standalone cut. “Following the Line” and “Let Go of My Heart”, particularly the latter, experienced success on Spotify and various New Zealand charts.

This single will go much further. It’s probably imprudent to say but getting in touch with his songwriting skills has transformed a talented musician into an all-around powerhouse. You can hear his joy in the music. He sings about the difficult adult subject matter here, the tone is conversational, but there’s an underlying excitement fueling this track. He sounds energized, ready to sing anything, and eager for listeners to take this ride with him. It’s a real charge to hear this from a performer.

The songwriting speaks to listeners without any artifice. The subject matter of romantic brinksmanship in various permutations is a staple of popular music for a good reason. They are timeless experiences and O’Connor’s songwriting taps deeply into the tumult he’s experienced. It’s easy to relate to. There are no puzzles to decode. The first focus of any popular song should always be communicating its subject and all the accompanying emotions to its intended audience. Arun O’Connor gets that to the marrow of his being.

I love the guitar and drums. There’s the impetus of striding, hard-driving rock and roll giving this song a charge, and riding its current is pure joy. Its transitions from one passage to the next are flawlessly handled, there’s no fumbling at all, and it has a glorious “live” sound despite the likely nature of its recording. I bet it will be a killer live number and setlist opener. There’s nothing complicated about translating this track from the studio to the stage; its classic construction makes it basically a simple matter of rehearsal.

I’m deeply interested in his successor to this song. Arun O’Connor has a voice able of taking on any kind of song, any sort of pacing and musical backing, and the instincts for making the right decisions he’s already exhibited assure me any steps from here will follow the right path. “Too Far Gone” is free from any missteps and has rarely heard freshness certain to make a lot of fans for O’Connor. It’s a powerful opening salvo. Let’s see if he has the firepower to change the musical landscape around him. I suspect he does. Coming in on the ground floor of a debuting musician with promise is a thrilling experience. This debut album will give us our first extended look at O’Connor’s talents and I believe what we learn and hear will be impossible to forget.