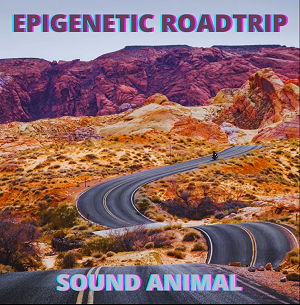 Sound Animal isn’t interested in business as usual. This neo-psych project wants to push the envelope regarding music’s capabilities rather than relying on time-tested tropes and predictability. There is familiar ground in their music tethering it to earth, but Sound Animal uses such familiarity merely as a launching pad to take listeners down unusual aural vistas.

The project has set a furious release pace since its debut. Sound Animal’s new EP Epigenetic Roadtrip begins with the centerpiece track “Noise Tongue”. The track is, by far, the longest included on the release, but never wearies you. Doom and stoner influences are strong throughout Sound Animal’s discography, but this composition falls more into the realm of dark ambient. There are some of the aforementioned elements, particularly doom, making their presence felt through such additions as the forlorn and often foreboding “vocals”.

The “familiar” in Sound Animal’s music lives in the buzzsaw-like and often synthesized guitar. Tracks such as this utilize synthesizers in other ways that you’ll recognize, but Sound Animal frames its musical musings in very idiosyncratic fashion.  It’s challenging music, yes, but it rewards listeners willing to hang with the work. An eleven and a half minute running time may seem daunting. It is, however, worth each second.

“War Fire” goes even darker than the opener. It starts off as a soundtrack for a slaughterhouse and the intensity only goes off the charts from there. There’s no question this is introspective music and won’t be everyone’s cup of tea, but the subset of music devotees who value an intellectual and atmospheric edge in their music, a release such as Epigenetic Roadtrip will be an interesting release. “War Fire” has a primal heart that the composition barely contains.

The woodwind sounds heard in the finale “What the Hell You Tryna Say” strike unexpected notes of fragility. The music otherwise draws from the same toolbox as its predecessors, albeit in its own fashion. Sound Animal’s conceptual intentions are obscure here; the title and its recurring presence early in the track doesn’t bear any obvious connection to the track’s mood. It’s a coda more than an extended cut clocking in at a hair under two minutes.

Epigenetic Roadtrip is an intelligent work and the musical textures are often compelling. It is a little too smart for its own good at some points, but such quibbles don’t mar an overall engrossing release. California based Sound Animal isn’t interested at all in serving up cookie-cutter compositions but, instead, hopes to break new ground. Their efforts are, on the whole, successful.

However, projects such as this are “doomed” to play best for niche audiences. Anyone looking for even a semblance of verse, chorus, verse will be deeply disappointed by Epigenetic Roadmap. Sound Animal may be very happy with that. This project has, without question, scarcely scratched the surface of its potential, however, and those who value music intent on setting new borders for what’s possible will revel in Sound Animal’s imagination. It’s definitely different and owes nothing to anyone.