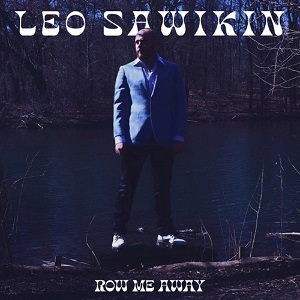 Leo Sawikin “Row Me Away” (LP)

Electrifying us with a leering lead guitar at the onset of a stunningly organic harmony between acoustic strings and a slothful bassline, “A Whole World Waiting” doesn’t disguise its romantic elements very well at all – it wears them on its sleeve quite profoundly. Much as the case is with the other songs in the tracklist of Leo Sawikin’s intoxicating Row Me Away LP, emotionality (no matter the strain) is front and center in the master mix much as the sear of a guitar part would be, and it’s often presented in as simple a set of terms.

Lyrically speaking, tracks like “A Whole World Waiting,” the balladic “Wasting My Whole Life,” and lavishly surreal “Take What You Want” are probably the most forward Sawikin has ever been with his audience, but they don’t feel overly theatrical nor progressive to the point of being aesthetically conceptual at all. Contrarily, the heavier this singer is with his verses, the more efficient his presentation tends to be, which isn’t just rare in the contemporary pop genre; it’s nonexistent. He’s got his own path to follow, and anyone who thought otherwise clearly didn’t imagine a record like Row Me Away landing on store shelves this autumn.

While “All Just a Drop” is sonically heavy where “Tell Me There’s An Answer” is much more fragile, brittle even in its instrumental setting, there’s a fluidity between these songs that allows for the entirety of the LP to feel like an effort you need to hear from beginning to end to appreciate. Sawikin is covering a lot of ground here both musically and poetically, but he’s doing so in such a manner that makes it seem as though he is a much more stripped-down way of doing things in the studio than it is. Truth be told, “Golden Days (Far Out At Sea)” is downright indulgent in a couple of spots, but it’s got such a compressed profile amidst the other material here that it doesn’t sound embellished or riddled with unnecessary charismas in the least. The same can be said for a gem like “If I Stayed,” and every other song included in this album.

The title cut in Row Me Away bears a lot of understated soul to the audience, but I think it’s in the lead single “Born Too Late” that we get a feel for the identity of this record in all of its full-color, alternative pop-influenced glory. There are no creative limits when you’ve got the kind of talent Leo Sawikin has – there’s only what you’re doing in this session and what you’re saving for collaboration or further cultivation, and it’s in this spirit that we find Row Me Away featuring some of the more on-the-fly emotional lashings of any pop record debuting this season. Whether you’re a big Chordaes fan or just happen to be in the market for a hot post-John Roderick singer/songwriter capable of hitting as many poetic high notes as he does the low, Leo Sawikin’s new LP is something you need to take a good look at.