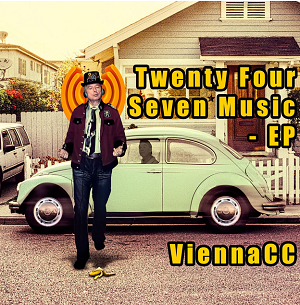 2021 has been a surprisingly good year for alternative music, and you don’t need to look beyond underground acts like ViennaCC to know exactly what I’m talking about. In his new single “Twenty Four Seven Love,” ViennaCC is driving home a classic alternative sound with a definitively more modern touch than most of the throwback-type players I listen to have been able to muster without the help of a collaborator, and in contrast with the pop scene, his sound is breaking away from trending minimalism and embracing the best things about sonic excess.

The tension on the backend of this mix isn’t just important to the delivery of the lyrics and the ultimate creation of the mood in “Twenty Four Seven Love;” in my view, it’s required. There’s really nothing that the verses can do on their own to buffer the bassline and the drums, and therefore I don’t know that ViennaCC had any choice but to go big and bold with the rhythm section here. He wasn’t afraid of the risk, and I think that because it worked out as well as it did in this performance, he deserves the reward of critics admitting indulgence has a place in this genre of music.

ViennaCC’s staggering contrast on the levels in this piece had me tripping a little bit at first, but all things considered, I can see where it produces enough texture in the instrumentation to justify taking such a dramatic step away from industry standards. The singing in “Twenty Four Seven Love” is what brings us full-circle, not the mathy qualities in the arrangement or even the pulse of the instrumental discord when everything is coming apart at the climactic chorus, and that allows for this player to do things that his rivals could only dream of trying out.

You can tell that the melodies in this song matter to ViennaCC enough that they’re never going to get lost in translation, even if his conceptualism is loftier than anyone else he’s competing with for an audience this autumn. He doesn’t want to crush us with brawn and unfiltered muscularity – there’s enough pop music in his tree of influences to demand a bit of structure, even if it isn’t something we’ve ever read about or listened to before, and “Twenty Four Seven Love” might be the best example of his giving structure to something otherwise built on the back of eccentricity.

Post-punk fans are going to really appreciate what ViennaCC is bringing to the table this month, and I think that throwback lovers are going to be especially tickled with what they come across in “Twenty Four Seven Love.” There’s nothing wrong with rocking the past when you’re this good at nailing the blueprint, and whether you normally go for this kind of content or not, I think the average music lover is going to discover that ViennaCC has something for almost anyone to get into. This track is his latest gem, and from experience, I can tell you now that it isn’t going to be his last.

The music of ViennaCC has been heard all over the world in partnership with the radio plugging services offered by Musik and Film Radio Promotions Division.  Learn more https://musikandfilm.com