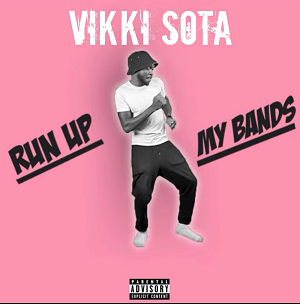 Little more than an ominous bass tone and an implied beat are needed to make a big statement in the first few moments of “Run Up My Bands,” the new single from Vikki Sota out now everywhere quality hip-hop is sold and streamed, but I’m not going to be the first to call this track a product of minimalism. In all actuality, I think there’s a bit too much decadence in the melding of these elements to call any part of what transpires in “Run Up My Bands” minimalist, but at the same time, I can see where a lot of critics would get hung up on how brilliantly cut and dry the cosmetic elements are in this release. Sota knows who he is and what kind of a rapper he wants to rep as, which is quite a step up from some of his contemporaries right now.

The bass has to be fat to get the rhythm of these verses feeling punchier than it would in a straight trap track, and because it’s interwoven with the percussion there’s no telling what is meant to be textured and what’s all tone – the physicality is all we can focus on. Some would look at this as being a bit of a drawback all things considered, but I think the result of this formula produces such a bold undertow of creativity that it would be silly not to have gone an eclectic route just for the sake of seeing what Sota can do.

“Run Up My Bands” has a climax that isn’t theatrical or bombastic, but instead meant to leave us feeling an icy chill usually reserved only for those on the wrong side of a business deal. There’s just so much pressure on the backend here, and yet it’s being appropriated in a way that leaves the vocal sounding crisp and delivered with a bit of charisma that normally isn’t possible inside the four walls of a studio. In short, Sota is going so much harder, delivering so much more emotionality even, than I would expect out of a non-live performance in this single that I have to wonder how much thunder he could invoke when taking to the stage in front of a large festival crowd.

Though I have a feeling that what I’m listening to in this single and the upcoming Genesis EP is just a sliver of what Chukwudi Victor Otubelu can do as Vikki Sota, you’d be crazy to pass this track up over the fall season under the guise of it being one of many interesting releases in this genre at the moment. Sota is in the beginning stages of something really epic in this piece, and despite the bevy of competitive output trap is unleashing at the moment, there’s nothing about “Run Up My Bands” to suggest that its creator isn’t able to go his own way when it matters – the opposite, actually. He’s following his own beat, and it’s setting him on the right path here.