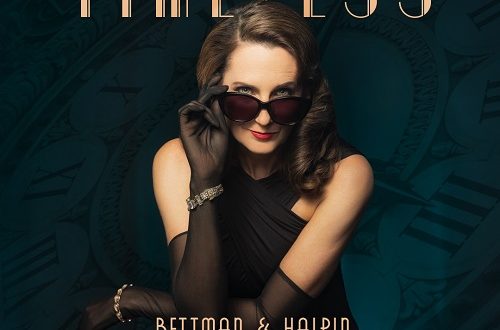 From passive melodies ala “It’s Only a Paper Moon” to a quaint harmony around every bend in “Summertime,” Bettman & Halpin manage to cover all the bases with their new album Timeless, all while promoting a rather minimalistic attitude when it comes to songcraft. The majority of the songs in Timeless are standards, with only three tracks serving as original content, and yet the personality of this music is shaped as wholly as it would be in a record entirely made up of homegrown compositions.

This isn’t just because of the passion of the players, but really because of how they approach the material, with a humble sensibility as opposed to something more intellectual in nature. There’s never an instance where they sound like they’re in over their heads, even though this is exceptionally retro territory for the pair. The contemporary hybridity they work into this LP left me really curious to know what they could do with other content of a similarly vintage variety, but moreover, it made me want to listen to the record all over again as soon as I finished it the first time.

Contrast can do a lot to facilitate a theme in any record, and this is certainly true in Timeless. Songs like “Miss Otis Regrets,” as well as the original trio of “How Did You in My Heart,” “What a Lovely Day,” and “When We’re Together” are all driven by a particular aesthetical divide that is brought closer through harmony as opposed to structure, which despite going against the popular trend in indie pop sounds very smooth and well-meaning here.

It’s obvious that fluidity is one of the most important qualities Bettman & Halpin value in the studio, and this content does nothing but present us with a very streamlined listen that scarcely invites the use of the skip button. Grooves are always huge in Timeless, even when they’re understated in tracks like “Moon River” or “Blue Skies” and especially in the likes of “It Don’t Mean a Thing,” and I get the idea that this act wouldn’t want to convey something to their audience without using every element at their disposal.

I didn’t know anything about Bettman & Halpin before listening to this album, but it’s got my interest since introducing me to this pair’s eccentric take on indie pop mundanity. There isn’t any reaching for experimental straws in this piece, but instead a sense of personal intimacy between artists and material that I don’t hear very much of in any records these days, let alone those that include so many cover songs.

I wonder what Bettman & Halpin are like live, and if it’s anything like what we’re getting out of the presentation they’re giving in Timeless, it’s got to be worth a look from anyone who loves provocative independent music. There’s an undisputed lack of originality in the underground at the moment, and it’s quite curious that a band covering old school tunes like these is sounding more organic than most anyone in their scene at the moment.