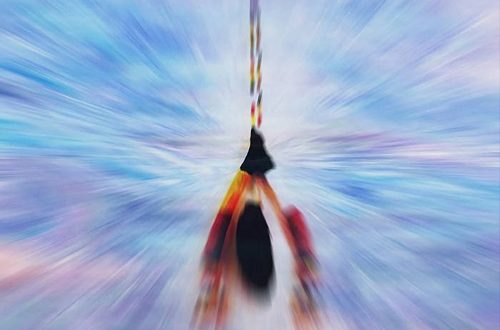 The work of Chris Cornelius is as inimitable as it is sprawling; from a lifelong love affair with music inspired by his own father’s career as a World War II Navy pilot/jazz keyboardist (who went on to perform on several tours after the war), Cornelius has a background most only read about in biographies of the greats — spending time in a slew of bands and adding feathers to his cap at every turn, there seemingly wasn’t much that Chris Cornelius couldn’t do. His pivot into what he calls “high vibrational music” came after a bout of spiritual enlightenment, and his artistic trajectory was forever changed as a result. Releasing a wide array of music within the “high vibrational” sphere with his brother and others, Cornelius has gone on to accrue over twenty full-length LPs — his latest entry into his ever-expanding discography, A New Dream, is a fantastic next step for Cornelius both as an overall artist and as a leading voice in the contemporary “healing music” scene.

At a dense twelve tracks in length, A New Dream is a spiritual music achievement in every sense. Beginning with the gentle, expansive “In the Heart,” listeners will feel a wave of calm and relaxation wash over them — the compositional scope that Cornelius uses to take audiences on such an unexpected yet necessary musical journey begins with a gentle push. “Soul Cultures” brings the tempo up and invokes a sound that almost brings old Nintendo 64 soundtracks to the forefront with its organ-like synths, and “Organia” welcomes in a bit of haus influences with its drum track, balancing the up-tempo shift with some far-out spacey guitar licks. “Vital Expressions” slows things down and introduces the sitar and flute into the fold of eclectic, layered instrumentals at A New Dream’s command; “Gaia” is maybe the most out-there track on the project as it consists solely of haunting vocals for a majority of its runtime before a pan flute enters the scene and mixes things up.

The back half of A New Dream offers up more of the already established sounds from Cornelius’ oeuvre, as things continue their weightless approach into discussions with the great beyond — the aptly-titled “In Rhythm” has a phenomenal drum break halfway through that brings danceability to the album after the cold air of “Gaia” has, perhaps, challenged some listeners with its impenetrability. “Introspection” conjures the compositional stylings of an ‘80s track, “Spring Savory” is a wholly upbeat song and one of the album’s standouts with its bubbly synth, and “Cornu” feels like a piece of George Harrison’s lost tapes from the Sgt. Pepper sessions with its balance of rhythm and sitar shredding. “Surrender to Hope” comes across as one of the more traditional tracks on A New Dream with its accessible “chorus,” or lack thereof, and its focus on Western instrumentation. “Bhakti Passion” arrives before long to take listeners on another unexpected journey and while the intermittent sitar use might throw some listeners off, the album had yet to incorporate it as well as it does on this penultimate track.

Finally, the title track “A New Dream” takes everything the album has accomplished and wraps it up with a globetrotting bow; the storied life of Chris Cornelius and his past reckons with his musical catalog in such an epic way that this finale feels deeply earned by the time A New Dream comes to a close. There’s nothing like this album out in the mainstream right now, but for those willing to search for it, A New Dream is just around the corner; and this is one dream you don’t have to be asleep to have.