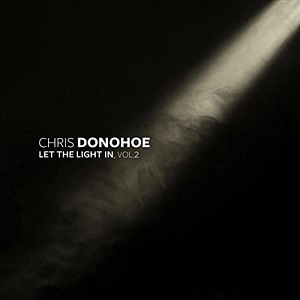 In the new single from his EP Let the Light In, Vol. 2, titled “Let the Light In,” singer/songwriter Chris Donohoe seems intent on making) it known to critics that he’s not a run of the mill, one-dimensional player in the modern pop game. He doesn’t shelter his unchecked emotions behind a synthesized harmony, and when faced with a challenging groove at the heart of this track, he doesn’t retreat in favor of blasting some over-the-top guitar solo in our ears. There’s a rock influence here, but it’s moderate enough to preserve the peacefully melodic vocal as if we were listening to a straight folk song rather than an indie pop tune. In short, Donohoe is cooking with creative gas in this release, and shedding the very notion of his belonging to any predictable group in the San Francisco underground today.

When the chorus clicks into place, this singer isn’t holding anything back from us but instead piling on as much of the gentle luster he can produce without breaking from the whisper-like vocal he employs. He’s more than aware of what it takes to control his melodic depth, and instead of running wild with what he knows he could do in this track, he lets self-control take over and we end up with a really evenly-delivered example of pop perfection in “Let the Light In.” Singer/songwriters don’t have to be aggressive in their execution when the foundations are this strong, and Donohoe rightly isn’t in this track.

This master mix puts more stock on the band than the lead singer in the second half of the song, but I think this had to be the case to appreciate how majestic a performance we’re getting from behind the microphone. Donohoe is illustrating how much power he wields without ever having to utilize the rather campy components of songwriting some of the lesser players in his scene would, and much as it is in the other songs on Let the Light In, Vol. 2, it makes his methods sound almost revolutionary by comparison. That’s telling of how weak some of the competing output has been this year, but also of how special his style is as it relates to pickier pop fans like myself.

If this is just a taste of what Chris Donohoe is planning on bringing out to the table for his third LP, the Bay Area scene should be very proud to call him a member in 2021. The best thing about “Let the Light In” is that it’s an upfront pop single that knows exactly what it wants to be – there’s no drifting between aesthetical realms nor a sense of searching in the lyrics that would be unavoidable in an unfinished narrative. Donohoe knows who he is and what sort of a message he wants his music to present to us, and despite the difficulties that come with getting appropriate attention in this medium, he isn’t showing any signs of slowing his campaign at all.