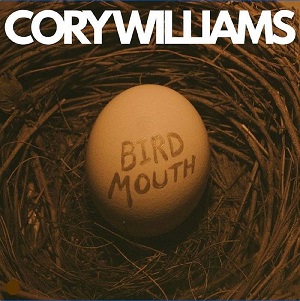 Heartbreak is almost as strong a motivator as love itself, and this is something Cory Williams seems well aware of with his sophomore release Bird Mouth, an LP born out of lost love as much as it was reborn, phoenix-like, out of the ashes that blossomed into a new relationship. The familiar flavors of Austin, Texas are boldly put on full display but are brought about in an almost midwest sensibility with its rough and tumble production lending similarities in structure to the recently returning genre of Midwest Emo if a Midwest Emo band was fronted by someone with the vocal training of Dave Matthews. The sound is something entirely its own, and though it pays homage to a vast array of Southern touches, Cory Williams uses Bird Mouth’s eight tracks to flex his lasting power and one-of-a-kind approach to songwriting.

Opening with the heart-wrenching “Foolish Reminder,” Williams lays it all out on the line from the start. “You lit me up; my body was aching. I’ve grown tired of what everyone is telling me that I’m thinking.” The pitch-perfect opening is almost the only way for the album to start off on the right foot. The following tracks grow far less melancholic than the album’s opener, but the raw entry point is necessary for listeners to fully find themselves awestruck with mouths agape at Williams’ open wound of heartbreak. “You ran away, I tried to chase you, but the foolish reminder I’m not going to reach you.” A strong album calls for one heck of an album opener and the following tracks have their work cut out for them in the shadow of “Foolish Reminder.” Luckily, Cory Williams isn’t afraid of shadows casting too much dark and is ready to bust out the flashlight.

Pivoting into “I Hope You Do,” the shadows immediately dissipate into a warm, bright love song about revealing secrets and exploring memories from long past. It’s clear that Williams is able to deliver the sadness as much as he can deliver some of the most heartfelt and organic melodies in the form of love songs. The harmonies within the second song’s chorus are particularly well done, and function as one of the more memorable, yet small, musical moments within Bird Mouth. The following songs further display Williams’ knack for balancing a past heartbreak with the promise of impending love and happiness. The lyrics often feel eager and optimistic against a musical composition that often contrasts such joy in ways that ultimately highlight the undertones of pain and anguish still associated within the subconscious of someone that has recently gone through the pain of heartache.

Bird Mouth is a beautiful testament to the strength and durability of Southern rock not only as a genre but as a lifestyle, and Cory Williams is more than primed to deliver on such a wallop of a concept. His deft understanding of humankind’s emotional psyche is on display and does wonders for the album as a whole, allowing it to reach both emotional highs and lows without ever sacrificing the album’s core quality.

User Rating: Be the first one !
Share
Previous Denny Bowen – “Bound for Glory” (SINGLE)
Next The Jones Title – “She Don’t Know” (SINGLE)