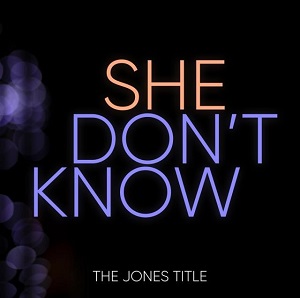 The Jones Title is a NY based outfit, that is difficult to categorize, which is precisely the way they prefer it. They describe their sound as a “marriage of a robust guitar attack, reminiscent of the early 90’s and clever lyrics, that veer between grandiose and confessional.” Their new single from their debut album, Birkenhead Drill, is called, “She Don’t Know.” The aforementioned track, alone, goes a long way in justifying The Jones Titles’ self-assessment. They have managed to write an Adult Alternative pop song, with a few doses of cheekiness, thrown in for good measure.

The Jones Title, formed around 3 years ago as a quartet, which they remain to this day. You’d be led to assume the band has been together, longer, due to the incredible cohesion they display, not only musically, but creatively. It’s safe to say that The Jones Title takes a few risks on “She Don’t Know.” The song kicks off with the rhythm section, in perfect syncopation, and then gives way to vocals and guitar. It’s not exactly a grab you by the collar intro, but it does create intrigue.

The guitar is where you really hear The Jones Title’s love of the 90’s, surface. The tone is similar to Purple era STP, or possibly even Superunknown, Soundgarden, though slightly less grungy. The final mix is a sound to behold, as there are next to no flaws, whatsoever. What’s especially impressive is that this track has several moving parts, and a somewhat unorthodox arrangement, which doesn’t always make things easy in a studio setting. The Jones Title show us as much talent from a production standpoint as a compositional one.

Excess express/ need to impress the princess. It’s always great to hear an act that places emphasis on the value and importance of lyrical content. There’s observational symbolism throughout the entirety of “She Don’t Know.” Even the band, themselves, are likely to find multiple meanings in the words they pen. Occasionally, you’ll find that your relationship with your songs, change over time, as well as your understanding of them.

With “She Don’t Know,” The Jones Title has offered a quality single. It has its share of complexities, but the reward for taking the journey is substantial. The track features great musicianship and vocal work, that can’t be denied, regardless of taste. FM Radio in 2005 would already have this song on heavy rotation, which is not to date the material in any way of course. The Jones Title is churning out great work, for their forthcoming debut album, and it couldn’t come at a better time.

The music of The Jones Title has been heard all over the world in partnership with the radio plugging services offered by Musik and Film Radio Promotions Division.  Learn more https://musikandfilm.com