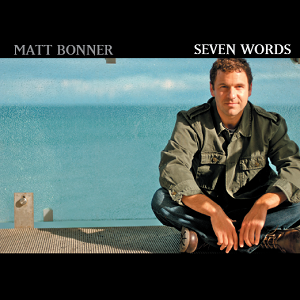 Careening out of the darkness with an especially jazz-laden groove behind every melody, the title track in Matt Bonner’s Seven Words welcomes listeners into this 2009 classic unafraid of the risk that comes with being extraordinary, and as we’ll soon learn, this feature helps to produce every powerful moment in this LP. While “Awake, Then” could have led the tracklist just as easily as the title cut does, I think its upbeat swing makes for a nice segue from the ascending opener into the more even-paced “Shining City.” There’s no putting this record down once you pick it up for the first time, and with that in mind, I recommend putting aside everything else in your day when sitting down to experience Bonner’s musical might for yourself.

If the moderate rock punch of a hypnotic “Over the Edge” doesn’t have you completely enamored by the talents this singer/songwriter has, “Lions” is almost certain to. Electronic psychedelia blurs with a subtle pop/rock hook in this track, the most powerful on the album in my opinion, but I don’t think that it feels so aesthetically experimental that it makes the other songs in Seven Words sound less than incredible. Instead, I see the abstract nature of this star single as a nice counterbalance to the moments of implied conventionality, such as the aforementioned “Shining City,” creating a listening experience for the audience that is certain to get a reaction out of us – no matter what style of music we favor the most.

“303” continues the electropop pulsations of its tracklist predecessor before turning the spotlight over to a wholly folk-rockish “Railway Line” when we’re least expecting something so simple and soft. The sudden shift isn’t discomforting though; it’s a thrill-inducer that makes the gush of the grooving we eventually hear in the heart of “Version of You” all the more irresistible to the ears. Bonner has a way of making even the most contradictory of aesthetical concepts sound fluid and familial in this album, and I’m actually surprised that it wasn’t noted for as much back in 2009. Seven Words has a format that has become increasingly common in the alternative rock genre over the past ten years, but with none of the ironic poeticisms overstated.

Led Zeppelin’s “Kashmir” gets a taste of the Matt Bonner treatment ahead of a concluding track in “Not Everything” that takes us back to the firm jazz footing that started off Seven Words nine songs ago. It’s hard to believe this record clocks in at a basic forty-five minutes and change, not out of it feeling rushed, but because of how easily one composition bleeds into the next, which is really something considering how diverse a pool of influences there are in play here. From one end to the other, Bonner sounds like a genius who came well ahead of his time in this industry, and though Seven Words will remain a cult favorite in 2021, I think later history will give it the proper respect it’s always been due.