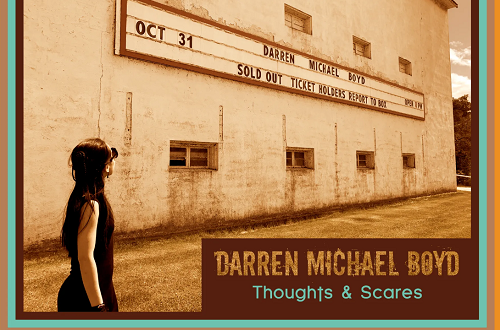 Something is chasing us with immense urgency the second we press the play button on “Proof of Monsters” that is immediately dark and yet freewheeling at the same time, but as is the case with the majority of the tracks you’re going to hear in Darren Michael Boyd’s Thoughts & Scares, juxtaposition is just the tipping point of expression in this piece. “Proof of Monsters” doesn’t fail to leave us without a steady segue into the core of a self-explanatory “Kickintheballs,” and while this initial pair of thrashing songs is enough to get us moving like few other duos can in rock today, “Broken Glass and Disappointment” will soon inform us of the spider-like unpredictability of the approach Boyd is once again taking to giving his audience a full-flavored treat of an album.

“Where the Crawdads Scream” and “Slow Dancing with Death” are quite different from a structural point of view, but their shared cosmetic vibrancy makes the transition between both of these tracks as smooth as silk. There isn’t a moment in Thoughts & Scares in which Boyd isn’t collecting his listeners like a stoic audience in desperate need of classical hellfire, but he doesn’t placate us nor assume that we can’t handle the full depth of his personality behind the guitar. There’s no letting up on the melodic discord in the likes of “A Waste of Perfectly Good Sadness,” one of the more moderate jams on the LP, but at the same time, overindulgence is not a word I would use to describe any of the music here.

“Abusement Park” clocks in at a little over four minutes in total length, and despite the Dave Mustaine-style tornado that we start with in the first couple of moments the song has to offer, there’s a lot more of an evenhanded feel to this performance than there is in “Toad Rage,” which feels like the natural single from the latter half of Thoughts & Scares. You can tell where Darren Michael Boyd was going over the same parts just to get a little brevity within the context of a song, but I don’t ever get the impression that his perfectionism hindered the cathartic release we find waiting on the other side of every big solo. He’s a very balanced songwriter, and while finding a backing band that can keep up with him might be difficult, getting him in studio mode appears to be relatively easy.

While “Galactic Blood Ritual Roadshow” and “Misty Mundae” have a lot to offer on the technical side of the coin, I found the closing title track in Thoughts & Scares to be the runaway emotional moment of the record, leaving me both excited and enthralled by the music that Darren Michael Boyd has just offered up as a sacrifice to the rock n’ roll deities. In this record, Boyd is a hero for all of us who miss the best days of rock’s smothering tonal dominance, and I can envision a lot of new listeners perking up their ears to his sound as 2023 arrives.

User Rating: Be the first one !
Share
Previous Ronnue “You Got Me Open” (SINGLE)
Next Northern Gloom’s “Around the Face” (SINGLE)