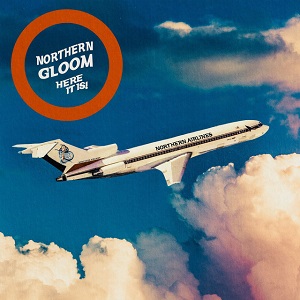 Northern Gloom’s “Around the Face” (SINGLE)

Like getting smacked in the face with the body of a bass guitar, the first couple of moments in which we experience Northern Gloom’s new single “Around the Face” live up to the title of the track and then some.

What they don’t completely reveal to the audience is how psychedelic a journey we’re about to take with this band, who borrow a little bit from the likes of Turn Me on Dead Man and Eddie Glass’ Nebula to form what undeniably feels like a post-desert anthem for the ages. The music is admittedly heavier than what the status quo is going to produce in any dimension this year, but if you were looking for anything other than sonic weight in this performance, you might have turned down the wrong alley this evening. That’s because Northern Gloom is waiting around the corner, heavy club in hand, and they’re planning on jumping anyone who stumbles into their world into a metallic gang that too many had feared was lost to the sands of time ala Wretch or Dopethrone.

While the guitars are pulverizing in most respects here, they aren’t drowning us in so much distortion that we aren’t able to appreciate the delicate vocal harmony carrying the lyrics forth from the center of the master mix. On the contrary, I think the tenacity of the riffs is probably what helps to highlight the melodic qualities of the singing even more than what we would have noticed in a more straightforward arrangement not as influenced by the traditions of psychedelia and proto-heavy metal as this piece is.

What we find on the other side of the wall of sleep in this performance has very little in common with the retro-stylized sounds of stoner rock as we heard it come back into popularity just a few years ago and more to do with the blistering chaos of the shoegaze era, when sonic brawn did equate to beauty. Northern Gloom wants us to feel their sound but also explore their depth as pop-influenced songwriters as well, and if there’s a message to take away from their experimenting in “Around the Face,” it’s that they’re still figuring out what to do with all of this mammoth power they’re wielding in 2023.

Rockers who want to embrace generator party-style riffs and blistering melodic underpinning this winter would be quite wise to hear what Northern Gloom is cooking up in the studio, as it’s quite the tasty treat for the ears, to say the least. I grew up on this kind of music, both from post-punk and metal circles the same, and I think it’s interesting the way this band is trying to straddle the delicate but stern line that has always separated the two greatest deities of the noise world. Northern Gloom comes for us as hard as they can in “Around the Face,” and if they carry this much of a kick in concert then I will be eagerly awaiting their next tour through my town.