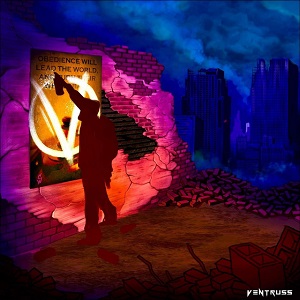 Although it’s rather bruising beside the softer melodic tones in the song, the percussive thrust behind Ventruss’ epic metallic dirge in the new single “Relinquished” is almost a necessary evil – were it not packing as much of a punch as it is in this instance, the thunderous ascent of the chorus might not carry the sonic and all-out brutal weight it does here. Ventruss is a new band on my radar, and following a year that left a lot to be desired among metal acts, they’ve got something really special in this new single. Confident in their stride and able to pressure the verses without overexploiting the tension in the instrumentation, they set a fine example of how modern hard rock and metal outfits should approach a radio-ready release with this incredible addition to their discography.

The rhythm is a major catalyst for catharsis in this song, but I don’t think it should be credited with making the verses sound as feral as they do. Ventruss has moments of sounding rather imposing and yet steady with the melodic tone of the underlying instrumentation, and this was intended to push us in the direction of the collective band’s sound without having to be too blunt with the mix. They’ve found a way of giving us a lot of moxie in their rigid harmonies without getting over the top with their lyrical content, and if you’re as big a follower of true metal as I am, you know just how rare an attribute this is to find among upstart bands still finding their place in the underground.

Airtight and unabashedly physical, the way “Relinquished” was mixed suggests that finding consistent rotation on the hard rock dial is a goal of Ventruss’, but probably not the only thing they had on their mind when they were penning this release. They never sound unconnected with the music and the fluidity of their play – honestly there’s enough of an unpredictable edginess to the way the chorus plays out that one could easily believe this to have been born of an extended jam rather than a writer’s room session. With the right exposure, I can see this breaking some ground that their competitors have only flirted with, and the self-control they demonstrate on all sides here is the most important reason why.

“Relinquished” finishes us off with even more of a kick than it starts up with, and though it runs a modest total length it doesn’t feel like it’s missing a key ingredient that every hit metal song contains. Ventruss is made up of devoted naturals- that much is made obvious to anyone who hears the guts of this track – and despite the seemingly small amount of press they’ve been getting coming into this release, they sound like a band ready to do big things. This is a look independent from their contemporaries but friendly to a swelling heavy metal underground, and that could be a winning combination for their band as they look forward.