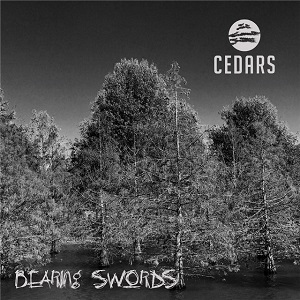 In their haunting new single “Bearing Swords,” darkly melodic outfit Cedars experiments with the limits of melodicism in a way that brings to mind some of the gods of synth-rock crossover music, and yet the metallic fitting that comes into play roughly halfway through the track winds up being the biggest takeaway from the song as a whole. There’s a gloominess to this performance that takes root not long after we get into the first stanza of lyrics, but to be perfectly honest, I don’t think the verses are what cast so much of a grim light on the tone and narrative presented in this song. If anything, it’s the way the harmonies are constructed that gives us the theatre for so much emotionality in “Bearing Swords,” which says a lot about this band’s depth in general.

Cedars doesn’t try to front with any synthetic edging in this mix; instead, this is one of the more meat-and-potatoes type arrangements I could have imagined for a song like this one. They’re taking some queues from the goths for certain, but I don’t get the feeling they were trying to play with thematic elements in “Bearing Swords” – they have a story they want to tell here that is independent of the camp their rivals would just as soon stylize an entire album around. Although I’m as much a fan of cosmetic frills as the next critic is, there’s something very chilling about the bone-dry conceptualism being reimagined in vivid black light here.

The bass ends up stalking us like a ghost towards the end of this single, and I don’t know that anything could have replicated its trancelike influence over the fluidity of the beat in this single. I wasn’t listening to a lot of Cedars music before I got turned onto this, but they seem like the type of band that could do something much more progressive in the studio and get away with it. This isn’t to say that most prog efforts are lackluster, but instead to point out how intricate making something deeply conceptual can be when you want it done right. This crew takes perfection seriously, and that’s evident no matter which angle we’re looking at this new performance from.

Whether you’re a fan of heavy music on a regular basis or simply like to check out something on the left side of the dial on occasion, the music Cedars are making right now has left me compelled to spread the word of their charisma as a band. This is a single that reaches out with both hands and pulls us asunder with its angst-ridden undertow, and while I have a feeling that there’s going to be more content like this to come from this group of musicians in the future – more likely than not even stronger than what we’re getting out of the muscularity in this piece – what they offer in “Bearing Swords” is top-notch from both critical as well as fan perspectives this winter.

Share
Previous Ventruss “Relinquished” (SINGLE)
Next Xoe Miles “Where Do We Go?” (SINGLE)