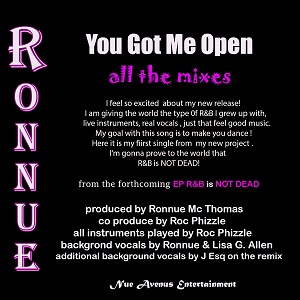 Ronnue “You Got Me Open” (SINGLE)

Shortly after pressing play on the standard mix of Ronnue’s new single “You Got Me Open,” one can’t help but immediately wonder if we’re living in 1993 instead of 2023. One thing is for certain here, and it’s that Ronnue certainly doesn’t care what year it is in this track, as he’s more than willing to conjure up yet another old-school groove in the name of delivering R&B melodies as we remember them in a classic era. Call his sound a straight throwback if you want – it’s not a stretch at this point. This is a player who makes no effort to connect with a modern trend, and if you’re a fan of iconic beats and familiar rhymes that feel as melodic as they do sternly soulful, “You Got Me Open” is a song you need to check out.

Additional cuts of the track feature J Esq and D08 in respective guest parts as well as an acapella and instrumental versions, but the most consistent element to behold in all of them is a sense of rhythm that never fades despite the change in setting. The arrangement is fluid and works well for different remixes, and I can understand where Ronnue might have thought using different players in the studio and formulas for this structure could show off some different angles of the hook. While it’s not his most aggressive piece of material to date, it does the job we’re looking for in terms of movement which, to be honest, is what most of this artist’s fans are looking for right now.

I like the apparent emphasis on the relationship between the bass and the drums in the radio edit as opposed to the standard album version of “You Got Me Open,” but the contrast between the two cuts isn’t so strong as to make one more of a spotlight on Ronnue’s abilities over the other. Again, someone with the presence this guy has developed in the last five years doesn’t have to go as above and beyond as he tends to when he gets behind the mixing board, but the versatility is undeniably inspiring when comparing what he’s doing to the vast majority of works we’re getting out of the mainstream right now.

“You Got Me Open” shows us that Ronnue is still the same Ronnue, and fans of the steady funk of his biggest hits are likely to find this dive into R&B’s slinkier side just as compelling a listen. There’s no debating the niche qualities in this piece, making it more than likely an underground affair more than a breakout experience for anyone who hasn’t heard the music Ronnue has recorded in the past, but I don’t think this artist is trying to win over the world in “You Got Me Open.” A personal story is being told here, perhaps a continuation of what started in his previous releases, and while the sound might be strikingly similar to what we’ve heard before, it’s indicating a consistency you can’t find anywhere else in his scene right now.