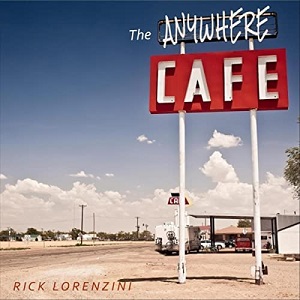 Southern California based multi-instrumentalist and singer/songwriter Rick Lorenzini’s The Anywhere Café demonstrates his versatility. He blends jazz and folk influences throughout the album’s dozen tracks and building the compositions around piano gives this collection a much different flavor than his earlier work. It is his second studio album, following his debut What Brings You Here. Extending his talents in such a manner leaves the songs wide open for incorporating the storytelling virtues that are one of his hallmarks. Including twelve songs on the release likewise shows us his ambition: there’s no coasting or filler. Each of the album’s dozen songs are fine-tuned artistic creations resounding with sincerity.

It’s a mark of supreme confidence that Lorenzini kicks off the album with the title track. The lyrics crackle with moments of low-key poetry and boasts an unwillingness to layer the songwriting with overwrought performed poetry. Lorenzini’s piano playing riffs away in a jazz mode without ever sounding too precious. The supporting vocals add a lot to the performance. “Before You Made Everything” takes a 180 degree turn. Lorenzini works in a much more solid folk vein with this performance relying on his acoustic guitar playing and vocals to carry the song. The lyrics weave through a complex array of emotions without ever losing its footing and Lorenzini’s singing has a level of emotional responsiveness certain to resonate with many listeners.

“Wouldn’t You Rather Be With Me?” gains much of its effectiveness from the intermingling of specific detail and vulnerability. The sense of loss at the heart of the song is convincing without ever descending into bathos. It’s a ballad, but never cliched, and Lorenzini caps it off with an eloquent guitar solo just after the song’s midway point. “The Ghost of Past Guitars” turns up the rock side of Lorenzini’s musical character yet stays tempered throughout. It is up-tempo without ever getting carried away with itself and his lyrical acumen is as strong as ever.

“Quiet the Rumor”, however, carries listeners back to the same piano-driven balladry that we heard with “Wouldn’t You Rather Be With Me?” without repeating himself. He excels writing about relationships with rare maturity and insight into the human condition. It is never overstated. “God Knows Better” is another exceptional example of his songwriting prowess. It features lyrics that process several different emotions through the course of the song and the delicate musical tapestry complements his voice.

The piano returns for “Say It Again” and it shows his penchant for beginning his compositions with memorable opening lines. Low-key violin joins the track and pairs well with the piano. It’s welcome how Lorenzini resists the temptation to layer too much piano into the performance; his playing boasts a spartan quality many listeners will admire. There’s a wealth of deep feeling material powering The Anywhere Café and the poetic veneer coloring the songwriting elevates the tracks. Rick Lorenzini’s latest release is definitely his best yet and opens an even broader future for this talented musician and songwriter.