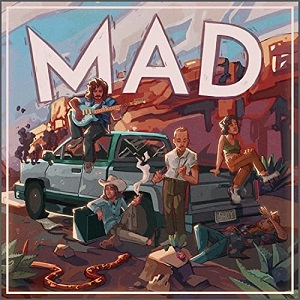 The bluesy strum and drang of Shady Oaks’ new single “Mad” will garner a wide and appreciative audience. The Denver, Colorado riff-rockers milk their blues influences for all they’re worth and never fall into the trap of regurgitating past glories. Lead guitarist and singer/songwriter Ty Gallaway wears influences such The Black Keys and The White Stripes on his sleeve, but his musical DNA reaches even deeper in the past. He transmutes those “voices” into his own impassioned and raucous voice. His other four bandmates are more than capable of realizing Gallaway’s ambition, but they likewise elevate the material with their individual talents. There’s no doubt that Shady Oaks is a band and not merely a glorified solo vehicle for Gallaway. “Mad” proves that and, for those meeting the band for the first time, it inspires listeners to keep coming back for more.

Shady Oaks doesn’t mess around. They turn “Mad” up to 10 from the outset and the thunderous reliance on riffs immediately pays off for listeners. They benefit from production that toughens up the performance from the beginning and the emphasis on grit over artificial polish reinforces the song’s rugged authenticity. It’s driven by a guitar sound boiling with blood and fury. Gallaway eschews conventional lead guitar pyrotechnics in favor of a more chaotic attack, but it’s a well-crafted illusion. He’s in control from first note to last.

The rhythm section of bassist Brendan Lamb and drummer Jonah Samp lay down an impervious foundation. Their performance tethers the arrangement to earth while Gallaway and rhythm guitarist Isaac Vance thrash away over the top. The band collectively achieves a near claustrophobic sound reflective of the song’s theme. There’s a bludgeoning quality in the way they approach the performance, but don’t think that it means “Mad” is bereft of genuine musicality.

Vocalist Loren Dorland doesn’t struggle to get heard over the fray. Dorland possesses the needed lung power to compete with Shady Oaks’ intense musical treatment and the vocal phrasing shares the music’s intense intimacy. There’s no doubt that the “star” of the show is the arrangement and talents of Shady Oaks’ individual players, but Dorland’s vocals are nevertheless an integral part of the band’s presentation. It isn’t an afterthought. There is genuine songwriting intention powering “Mad” and well worth hearing.

Shady Oaks are creating a space for their work in the modern heavy rock scene that owes little, if anything, to the past or present. Gallaway and his bandmates are keen listeners, without question, and they’ve taken the best elements from their respective influences. It is their ability to take those elements and refashion them into something familiar, yet new, that distinguishes them from a bevy of peers and contemporaries. “Mad” burns with such high intensity heat that you can’t help but believe the title track of their latest release promises the album’s remaining songs reach the same scorching temperature. It’s more than promising. Shady Oaks’ “Mad” is a harbinger of even greater achievements awaiting listeners and prods you to investigate further.