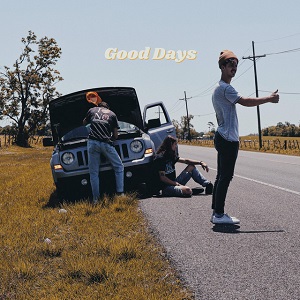 New Orleans’ The Crowe Boys are three brothers who are steadily amassing a rabid following in the NOLA area and branching out into the national spotlight. They infuse their personal take on folk music tradition with genuine rock and roll energy. Their youthful vigor complements the maturity and undeniable melancholy lurking beneath the surface of their latest single “Leather Wallet”. It’s an ideal song for the trio at this juncture. It’s certain to play well at the band’s numerous live gigs and will further burnish their growing reputation as a superb concert unit; tracks such as this are excellent building blocks for their burgeoning popularity.

The crisp and bright acoustic guitar opening the song sets up the track. It’s initially manned by nothing but singing and the acoustic guitar, but few if any will complain. There’s a controlled yet undeniable surge propelling the track forward. It shifts into a higher gear, of course, when drums join the fray and the propulsive attributes present from the outset flex with muscular musicality. Maintaining a careful balance between their folkie inclinations and rockier tendencies isn’t easy, but The Crowe Brothers make it sound effortless. It comes across as a natural extension of their personality and every note, every word, has the unmistakable ring of authenticity.

“Leather Wallet” has lyrics laden with concrete imagery. It’s a work listeners will relate to with ease as nearly every human being experiences the sense of dislocation permeating the words. The theme of the song is clear from the outset. The Crowe Brothers, however, never take any shortcuts with the track and the hard-won wisdom of young men beyond their years comes across in every line. It’s never overly dramatic but tempered and rife with craftsmanship you may expect.

The vocals have the same unexpected maturity. The deep voice has enough command of melody and dramatic potential to accentuate the lyrics without ever sounding too heavy-handed. It has sharp timing as well that shows an obvious dedication to marrying the singing with the arrangement rather than juxtaposing them against one another. The singing turns up the heat at all the right points. Phrasing provides an equal measure of musical pyrotechnics though it doesn’t overemphasize a single point during the performance. There’s an even-handed touch present from beginning to end and hearing the vocals latch onto particular images further reinforces the song’s merits.

It’s the latest in a string of material the band has written in recent years. “Leather Wallet” has a deceptively simple message, timeless yet obviously close to the band’s heart, and a combination of elements ensures you will feel every word and instrumental turn. Talent is never enough; passion and discipline must accompany it. The Crowe Brothers make it clear during the course of “Leather Wallet” that they possess those attributes and bringing them to center stage is a bold move. It won’t be the last musical move The Crowe Brothers have. Their prolific hand will always be turning pen and paper to write a song. Based on what we hear with this single, they are a band well worth watching.