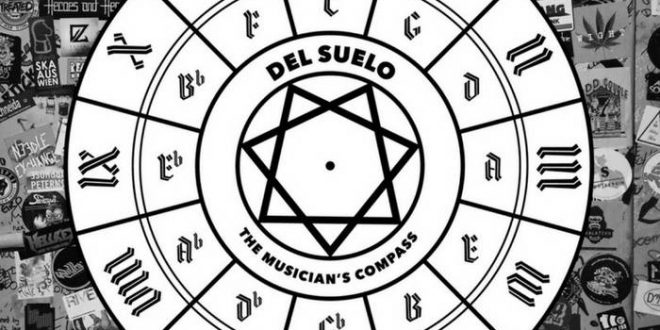 Del Suelo’s new album The Musician’s Compass: A 12 Step Programme has rocketed its way into the title of most anticipated record of the year, and having just given it a listen over the weekend it isn’t hard to see the reasons why. In an era where charlatanism has run rampant in the music industry and few artists have the gumption to stand on their own two feet without the assistance of some larger trend or movement, Del Suelo has bravely gone off on a limb all his own. His sound is evolving into that of a one man jam band, and music enthusiasts who need a shot of experimentalism to save their year would do well to check out his latest transmission.

There’s no denying that all of the songs on The Musician’s Compass are extremely intimate and reflective in nature. There’s the constant vibe that we’re listening in on a spoken word reading of someone’s diary, and Del Suelo himself goes a long way to making us feel less like a fly on the wall and more of a trusted cohort he’s chosen to confide in. When I first started listening to this record, I wasn’t quite sure how progressive it was going to get. By the third track, it was clear how in-depth a piece he had really created.

“Berlin Calling” might be the watershed moment that Del Suelo has been looking for since he first got into music. It’s certainly one of the stand out moments fromThe Musician’s Compass and boasts the most ethereal design of any track on the album. It might have been originally composed as a bridge piece between the glaring “Pack Rats” and the vexing “A Lust Supreme,” but in the end it manages to be so much more than that. I love how unpredictable this album is, despite its broad conceptualism (which would have otherwise made another record just as ambitious perhaps feel a little winded).

As a longtime touring member of the band The Dead South, Del Suelo has kept up a pretty sterling reputation in indie circles for his skills as a player, but through his solo work we’re getting to really understand why so many of his peers have respected him as a collaborator for over a decade. He doesn’t have to bring any big name guests onto this album to give it star power, and somehow the songs all gel together in a larger than life way in the same style as an operatic soundtrack. Del Suelo is one of a kind, and he doesn’t mind being the lone member of a category.

I don’t normally endorse albums that have received the level of hype that The Musician’s Compass: A 12 Step Programme has received since it was merely announced almost a year ago, but songs as stylishly original as these deserve to be heard by as many people who can access them. This is an extremely rare scenario where an album actually lives up to all of the fanfare surrounding its release, and Del Suelo deserves every bit of credit for getting it to this point entirely on his own. Do yourself a favor and secure your own copy when possible – you’re not going to regret it.