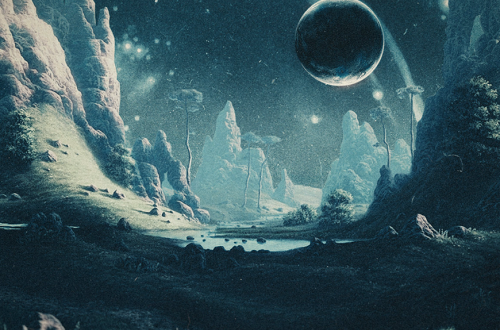 Del Vertigo “On the Day That You Come To” (LP)

Percussion isn’t always presented from behind a drum kit in the new record On the Day That You Come To from Del Vertigo, but often from the force of the melodic elements on their own. Take for example “In Dreams” or “Theres a Glimmer in the Thicket,” both of which move a lot of sonic weight without pummeling us with any forceful drumbeats whatsoever.

There is both an implied intensity from the lack of conventional percussion in these songs as well as a carnal feeling of incompletion that circles the lyrical narrative presented in these lyrics, which in my opinion changes the entire core meaning of what Del Vertigo wants to tell us in On the Day That You Come To. This has a lot more angles to it than the average extended play, with its creator sounding haunted by demons personal and existential the same in tracks like “The Fall,” “Obsidian Hills,” and the title track, and still, trying to step away from this record once you’ve gotten immersed in its twisted world of storytelling is pretty difficult, to put it mildly. In the pantheon of smart progressive music out right now, this is one of my favorite new releases of the spring.

More or less, Del Vertigo seems to fetishize putting lyrics where we’re not quite expecting to find them, in addition to situating a lot of the emotional contrast in this record in between the harmonies as opposed to in the dead-center of the spotlight. “In Dreams” and the title cut have pop sensibilities that are buried deep within the fuzz of the finish, but the verses are sewn into the body of the music with such careful precision that we’re never completely without a poetic compass in On the Day That You Come To. Angst is undeniably one of the key components of the moodiness here, but it doesn’t steal anything away from the unexpected catharsis that comes spilling out in “Obsidian Hills,” one of the more surprising hits from this tracklist. It’s usually pretty hard to get an EP to the point where it feels as complete as well-rounded as this one does, but going off of the kind of work that Del Vertigo is putting into this piece, I would expect that a proper full-length album is going to be on the more elaborate side for sure – in more ways than one, I would wager.

On the Day That You Come To is a record that ventures off the beaten path in the best way possible, and as I’ve always said, an artist who is willing to travel the untraveled route in the studio or on the stage has the most to gain professionally. To me, Del Vertigo really breaks the mold with the concept here, and although it could have been just a bit less scattered by design and still have offered us as sterling a listening experience as we get with this version, I think its intentional exploitation of chaos is going to get more than a couple of people excited this May.