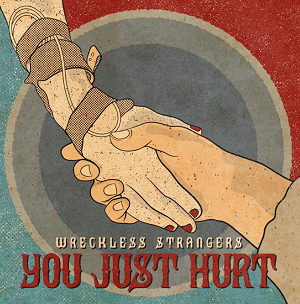 “You Just Hurt” doesn’t have a single lull over its four-minute and nine-second running time. It’s not a surprise, really, considering the impressive list of credits the Wreckless Strangers’ members can claim. This group of six session musicians and longtime friends worked in the past with musicians as diverse as Elvis Costello and The Fabulous Thunderbirds along with a bevy of regional and local acts. They’ve released two singles since first banding their talents together and their new album When the Sun and a Blue Star Collide is a product of the pandemic that reminds us even flowers can bloom in an otherwise difficult time.

The new song is arguably their richest single yet. The guitar team of David Noble and Rob Anderson lead the way through both the song’s slide and rhythm guitar playing but the former is undoubtedly the lead musical element. Few fans of the style will dislike the guitar sound the band achieves, they sound a little like later-day Allman Brothers, but it puts a distinctive stamp on the song.

The rhythm section carries the same weight. Joshua Zucker’s bass playing and Mick Hellman’s drumming obey the fundamentals that make blues songs work but there’s skill evident every step along the way. It’s far from cookie-cutter. They dial into the sort of pulse that “You Just Hurt” demands without ever imposing themselves on the track and this sort of artful blending into the sonic tapestry deserves applause.

Noble’s lead vocals are peppered with some occasional backing reinforcement. The band’s second lead singer Amber Morris comes through the mix and her voice provides just enough of an upper register tilt to the song’s singing. Keyboardist Austin de Lone is present and accounted for though the mix does him fewer favors. You hear his presence, instead, in the well-rounded sound the Wreckless Strangers deliver here.

It’s not always easy to catch every word of Noble’s vocal, but the majority comes through. There’s scathing self-reflection present in the song’s lyric, but there’s also a powerful understanding of how life moves and where fault often lies. Many listeners can take or leave meaningful lyrics, but those who value an outside the lines approach rather than revamping blues cliches to no effect will appreciate what the band gives you here.

It is faithful to the form. This doesn’t sound like what happens when dilettantes try sounding authentic but, instead, what happens when skilled and respectful musicians try to take something from the past and make it their own. “You Just Hurt” is their own, working within a tradition, but ringing out with the qualities that we associate with a personal statement. It’s the album’s third single but few listeners will finish this song doubtful that there are deeper riches to explore. They have a rich history of two releases behind them and “You Just Hurt” has no hint of them slowing down. It’s clear from the long list of projects and credits shared by these musicians that they are in music for the long haul, and you hear that reflected in this song.