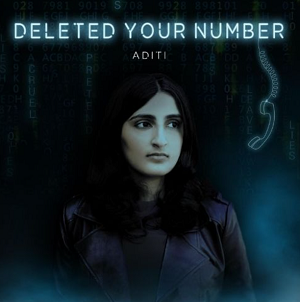 Aditi Iyer’s “Deleted Your Number” is the Mumbai, India-born singer’s new single. It’s the latest chapter in a musical journey Iyer began at age three when she first started singing and has perfected her craft over the years with hard work and discipline. It has produced two EP releases preceding this single, The Girl They See and Dollhouse, and garnered Iyer significant global and regional airplay. “Deleted Your Number” represents a meaningful step forward for the songwriter and performer while exploiting the song’s enormous potential for entertaining listeners.

She masters a lot of different emotions within one song. There’s scorn, heartbreak, relief, jealously, and other variations percolating throughout Iyer’s writing and a couple of particularly nice rhymes help drive the song’s points home. A notable break with the path many songwriters choose with tracks such as this is the lack of prominent bass. There’s bass, of course, and it has an impact on the song, but Iyer doesn’t prioritize it over other parts of the track.

The percussion is never omnipresent either but, nevertheless, pushes the song along. It’s an important part of enjoying this track to hear how Iyer and her collaborators bring its disparate elements into an unified whole. There aren’t any jarring or discordant moments when it sounds like Iyer tried jamming something into the song after the fact. It has the feel and sound of a song born fully formed from her imagination and life. It sounds easy, but the best performers have that the habit of making the difficult sound as natural as breathing.

The language has a percussive quality too. Iyer accentuates that without overpowering the audience through phrasing that’s attentive to every emotional shift. Hearing how attentive she is to the song’s needs shows how far beyond her age she’s working and there doesn’t seem to be any limit to where she can go. Sensitivity, delicacy, and power live side by side in her voice and Iyer modulates between each without slipping up. The live qualities of her performance are important as well.

She has a canny instinct for building her songs around emotions everyone can recognize. “Deleted Your Number” explores an experience almost everyone is familiar with without pretending the singer is above it, beyond it, or outside of it – Iyer places herself in the middle of stormy emotions and invites listeners to join her. It’s never an unpleasant or exhausting listening experience, however, and invites repeated hearings.

It’s a testament to her skills that we readily accept. “Deleted Your Number” is completely entertaining from beginning to end while also impressing you with its powerhouse emotional punch. It’s a song that will find its mark with young and older listeners alike because it’s connected with life in a way everyone can understand and doesn’t pretend to be anything it isn’t. There’s a rare level of maturity in this song for a performer so young, but that sounds like such a cliché. Aditi Iyer’s a major talent at any age and her gifts burn as incandescent as ever.