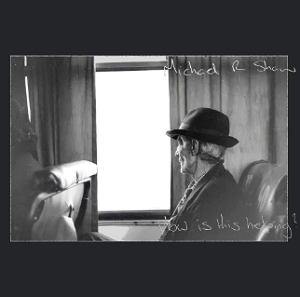 Michael R. Shaw’s album How is This Helping? is the latest solo effort from the respected English songwriter and solidifies his status as one of the best alt-folk/singer-songwriters’ working today. It is his first solo collaboration with James Youngjohns, fresh from playing guitar on and co-producing Matt Hill’s latest outing Return of the Idle Drones but make no mistake about who commands listeners’ attention. Newcomers, particularly if they appreciate poetic-minded yet accessible songwriting, will likely be taken aback by Shaw’s talents.

They are considerable. The hushed and deeply musical “Lord of All” never rises above a meditative murmur but, nevertheless, harbors abundant power. The ingredients are limited though potent. It opens with a smattering of sound effects before lyrical acoustic guitar emerges from the mix. There’s little deviation in the song, there doesn’t need to be. The guitar, Shaw’s voice, and ghostly strings are enough.

“Matter” opens with additional meditative acoustic guitar. It has much more deliberate pacing than the opener and a light percussive shake further fleshes out the song. The backing vocals give the song added “body” as well and never sound like a needless affectation. Shaw’s lyrics are more pointed than before, even a little dismissive of his targets, but nonetheless quite good. Synthesizers swell during the opening for “Sinner’s Charter”. It’s much different sonic territory than the acoustic tracks, but listeners will adapt fast.

It falls into some musical netherworld, art-pop if anything. A simple melody underpins the song and Shaw elaborates on its foundation with chiming guitar embellishments. The crowning touch of the track, however, is Shaw’s vocal. There’s a convincing ache in his voice that you can’t turn away from and the lyrics are among the album’s best. Fiddle, light percussion, and acoustic guitar return with “My Friend” and the playfully spontaneous feel of the song is a bit deceptive. There are deeper layers in this seeming throw away for those who care enough to explore.

“The Unelectable Liar” begins with jangling guitar and some exceptionally tasty bass playing. It achieves a smoky alt-folk texture and has a particularly compelling break at the song’s chorus. It’s one of the album’s best moments, though some may not be fond of how many “vocalizations” Shaw drops during a top-notch guitar solo. Reverb laced electric guitar gives “The Warm Sun” an unusual spin setting it apart from the other songs, but the essential template remains the same. It’s an illustration of the riches found in Shaw’s songwriting.

“Proud of a Rock” brings another high point. This is near full-on folk-rock and boasts impressive gravitas from the outset. It is instrumentation and the march-like tempo that contribute to this most of all, but Shaw delivers a vocal accentuating these strengths. He sings the finale “Goodnight Sweetheart” in a much different voice than its predecessors, it’s quasi spoken-word at points, but remarkably dramatic. How Is This Helping? is a special collection that tackles adult themes without flinching and sparkles even brighter thanks to several satisfying musical turns.