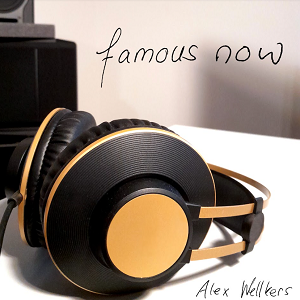 Alex Wellkers’ new release famous now is the Swiss-born singer/songwriter’s third studio collection and the latest chapter in a familiar story. This young artist first felt music’s pull as a six year old child when he began playing accordion and soon moved on from there to classical guitar, harmonica, and keyboard.

His love for music really took hold when he discovered blues music for electric guitar. This spurred the next stage in Wellkers’ creative development as he started writing songs at age eleven and, by sixteen, performing publicly. His style gravitated towards rock and grunge in the coming years and Wellkers’ songwriting shifted from German into English. His debut five-song EP release pre emerged in 2014 and he’s followed it up with eight EP successors over the next seven years.

famous now is Wellkers’ first full-length effort. The nine song collection opens with the stark piano balladry of “Get This Far”. Brian Barber’s piano playing weaves meditative melodies supporting Wellkers’ vocal that never threaten to overshadow his singing. Many listeners will enjoy the declamatory quality Wellkers achieves on some lines; emotion flares from his voice without it ever jarring listeners.

“What Keeps Me Alive” moves in a 180-degree different direction. It’s a simmering rock track with intermittent explosions lunging from the arrangement, but Wellker’s approach never chases the lowest common denominator. His impressive understanding of how rock songs hinge on manipulating dynamics in an ear-catching fashion is another of the song’s great strengths. Akito Goto’s cello joins Julia Stein’s violin and viola during “We See It All Come Down” and it accentuates the melancholy in Wellker’s voice. This track has a much more theatrical slant than those preceding it and ends with convincing hard rock making its presence felt.

“Dread Love Passion” is another impactful rock cut utilizing a keen sense of dynamics. It’s much busier than its earlier counterpart “What Keeps Me Alive”, but never gratuitous. The track is another impressive example of his ability to orchestrate a song’s dynamics in compelling ways, but mastering such talents at this young age dwarfs that achievement. Almost everything about Wellkers smacks of being a prodigy.

He returns to his native tongue for “Der Schmied Aller Leben”. You may assume that, after five English language songs, Wellkers’ veering into German might be a misstep. His performing abilities and the song’s strong suits, however, allow him enormous latitude to take these kinds of risks without ever artistically face-planting. “Satisfied” revisits the rock posture of earlier songs, once again leaning in a harder direction. Anyone who likes guitar, bass, and drums paired with a particularly emotive vocalist will definitely appreciate Wellkers’ take on rock traditions.

“Now I See, Now I Regret” concludes the album in a definitive fashion. The lighter strands that are woven through many of famous now’s songs are outstanding, without question, but it’s the darker and denser threads holding everything together. The finale is a powerful synthesis of the two and benefits from arguably Wellkers’ finest vocal. His creativity scales new heights with this full-length release and it’s well worth the journey.