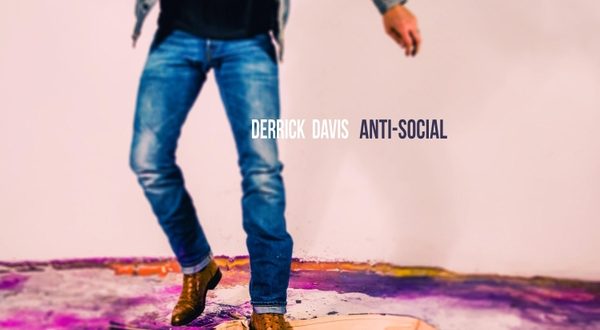 Some young songwriters have no trouble being followers instead of leaders in their scene, but Derrick Davis definitely isn’t among their ranks. Davis is treading some sophisticated waters in his new album Anti-Social, clobbering anyone who presses play on the stunning “End of Days,” “All I Need to Know,” “Best I Can” and “Clark Kent” with endless harmonies that impart an uncompromising emotionality which, personally, I haven’t heard from any of his peers this year. Anti-Social is as riddled with swing as it is bursting at the seams with a colorful, earnest poetry dispatched by Davis from behind a golden microphone, and it’s currently my unrivaled pick for the best original album by a pop/rock singer/songwriter out this March.

Let’s not beat around the bush – this isn’t the first time that Derrick Davis has brought the American underground to its knees with his stellar approach to indie rock. In his record And Everything in Between, we saw glimpses of the muscular melodies that would be more fully realized in tracks like “Carry Me,” “Life of the Party,” “Hunter” and the supple “Light It Up.” Anti-Social is a stylistically evolved take on his crisp choruses and neon grooves (the best of which can be found in “Blow Song” and “Livin”), but it isn’t devoid of the subtle decadence that made his past releases the critically acclaimed smash hits that they would eventually become. Derrick Davis is constantly developing his sound, and this latest album sees him taking control of his aesthetical direction with more prowess and precision than ever before.

“Clark Kent,” “Best I Can” and “Hunter” are pretty lyrically-based tunes and center on their lively constructions above all else, while “End of Days,” “Life of the Party” and opening track “All I Need to Know” feel more like instrumental showcases that just happen to be sporting some really memorably hooks in their choruses. There’s a lot for us to sort through in the numerous layers of textured poetry and lavish melodies, but as complicated as its compositional makeup may be, Anti-Social never comes off as a pretentious or inaccessible exercise in egotism at all. I don’t get an arrogant impression from Davis’ swagger in “Best I Can” or “Light It Up;” if anything, I get the sense that he’s more comfortable in the studio here than he’s ever been previously.

Anti-Social will provoke contemplation, crying, laughter, reflection, and on occasion, eroticism, in anyone who listens to its contents this spring. In the last month leading up to its release, I’ve heard just about as much buzz as an indie record can boast before being exposed to the general public, and in the chorus of “End of Days” alone, I came to the realization that none of the talk had come even close to preparing me for this watershed LP born of unmatched emotion. Derrick Davis is singing from his heart in this song and all nine of the knockout ballads and breathy rock n’ roll anthems that join it in the tracklist, and while it’s just the latest in a string of successful efforts from this singer/songwriter, it’s quite possibly the most affective piece of music we’re going to hear in 2019. Anti-Social is an album that is beyond brilliant.

User Rating: Be the first one !
Share
Previous Fade In by Matt Shapiro
Next Para Lia – Soap Bubble Dreams (LP)