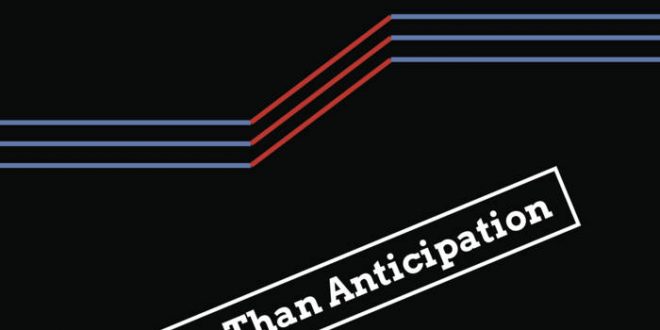 With a swift kick from an electric guitar riff, a deluge of drum-led chills come pouring out of our speakers as “If This Is Real” begins to play. The opening track on the new album from Dizzy Box Nine, Faster Than Anticipation, “If This Is Real” sets the tone for everything that’s going to follow its nearly four minutes of rock n’ roll sprinting, but don’t get me wrong – not every song here will follow the beat of this composition. Dizzy Box Nine get a little funky with the rhythm in “The Sun Came Out The Other Day,” take a torch to pop conventions in the throttling “Near You” (which features the best harmony of their discography around the 0:13 mark) and break put away the rock riffage for peaceful balladry in “Deep Inside Your Mind,” and that’s only the first four songs on the record.

“Friday Night” reintroduces the adrenaline initially abandoned in “Deep Inside Your Mind” before clearing out some space for “Phone Bill” to crush us with its Sugar-style swing. Grooves are a main ingredient in most every recipe Dizzy Box Nine is cooking with in Faster Than Anticipation, with certain tracks – like “OK OK,” for starters – throwing beats at us with more tenacity than I had originally thought this group could muster. Pop Fantasy, the band’s previous album, was definitely dance-crazy, but I don’t know if it had quite as much of a punch in comparison to what this record is offering us.

“Amazing Night” covers us in alternative rock fuzz where “Little By Little” feels a little more straight punk, at least from a cosmetic standpoint, but both of these two songs – and, to a lesser extent, the slowed-down “It’ll Be OK” as well – are cut from the same left-field cloth in the long run. The alt-rock of previous generations can be felt in the strut of “For You” even without its grungy beats, but I think it’s important to note that nothing in Faster Than Anticipation seems like it’s been imported from a bygone era. Tracks like “Sometimes I Feel Like This” have too much of a contemporary postmodernity in their construction to have been drawn from some other period in history; Dizzy Box Nine might wear their influences on their sleeve, but they’re as far away from harmony hackers as it gets in this game.

Dizzy Box Nine wrap up Faster Than Anticipation with a pair of stunners in the noise-pop tune “Let’s Go Skating” and multidimensional “This Is All For You,” the latter of which I would actually nominate as the most provocative song the band has ever recorded together. Even with the genuine competition they’re facing across the indie spectrum, this is one group that isn’t backing down from the challenges that come with trying to break through the mainstream in a time that hasn’t looked upon rockers with particular favor. Faster Than Anticipation, in this sense, is a battle cry from a band that still feels like they have a lot to prove despite having a litany of successes under their belt.

User Rating: Be the first one !
Share
Previous SHOLA EMMANUEL
Next ANNA MAY