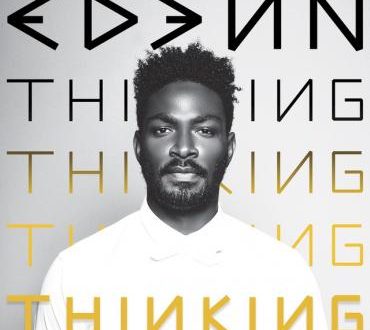 A melody rises from the silence like a mysterious fog over a lake. It starts to warm things up, and I wonder if this isn’t fog after all. Maybe it’s steam? Maybe the warmth of the air around us, represented in Edenn’s gentle vocal, clashing with the cold stillness of the water, in this scenario embodied by the crisp synth tones in the backing track. We’re only ten seconds into his new single “Thinking” and there’s an ominous vibe that we can’t seem to shake, a sort of enticing element of danger that we can’t resist no matter how hard we try. Are we getting closer to Edenn’s core in this track, or is his aesthetic enveloping us in an overwhelming embrace? The contrast between the darkness of the music and the soul in his voice is almost like a black and white noir film that uses textured lighting to create a mood that’s striking, if not a bit underscored.

We move into the main verse of the song. Edenn’s in love, and he can’t stop thinking about this love, yet somehow it isn’t present, it isn’t tangible or physically within his grasp. He’s alone in his mind with thoughts of this missing link to his life, and he’s telling us that it’s within his reach. So why doesn’t he have it? Why is he chasing after this emotion and thinking about the consequences that it will bring rather than grabbing it with both hands? Perhaps it’s that in his contemplating this love, the endless passion that he’s got in his heart, he’s analyzing what love can really mean when it’s allowed to fill in all of the empty spaces.

Edenn spent time earning his master’s degree in Belgium, and it’s clear that the influence of Euro Pop was not lost on his stylization as an artist. There’s a certain futuristic sensibility to his sound that instantly reminds me of some of the slicker beats I’ve heard in French house music, yet there’s also an accent of surrealism that sets the tone for the entire track and almost makes this song feel a little psychedelic in its finished form. By the time we reach the climactic musical breakdown towards the end of “Thinking,” the hook has already been planted in our minds and the chorus has planted itself firmly in our memory. One thing is for certain, this man knows how to write catchy, albeit avant-garde, verses that leave a lasting impression long after a virgin sampling of his work.

I expect that we should be hearing a lot more from this burgeoning artist as the year progresses, as “Thinking” is bound to find a comfortable home in this present market that is quite desperate for some fresh rhythm and blues that doesn’t hold back from experimenting with different themes. It’s interesting that Edenn chose this song to serve as his foray into the pop music spectrum, because out of all the subject matter he could have drawn from to create his debut track, he chose the one quality that people seem to be lacking the most right now: introspection.