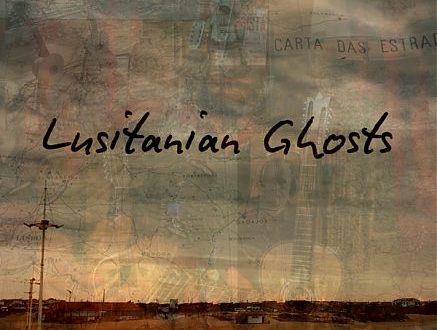 Portuguese-Canadian singer/songwriter Neil Leyton hasn’t been active much in the last ten years, and certainly for good reason. He’s been cultivating a new sound for all of us to enjoy as a follow up to his last record, The Betrayal of Self, cut all the way back in 2006, and he’s finally found what he’s been looking for. In his new project Lusitanian Ghosts, Leyton teams up with a collective of European and American players, all of whom experts in their craft, to forge the epic new eponymous debut album. Personally, as a longtime fan of Leyton’s work, this has been a long time coming for me to review this signature piece of music, and my, oh my, was it worth the wait.

In the opening track “A Long Time Ago,” we’re greeted by gently plucked guitar strings that gently lead us closer to the main verse of the song. The strings are hypnotic and played with the same delicate attack as a harpist might employ, and the results are definitely make for just as ethereal of content. The carefully woven vocals dance around the strings and it’s almost like we’re casually watching a river slowly stream past us in the most relaxing fashion. It’s not long before the volume knob gets a little bit of a kick and we’re rocking in the song “The World.” The international tinge continues, with this track featuring some of the most intriguingly fine-tuned rock beats to be found anywhere on the album. To call Lusitanian Ghosts an alternative rock collective in the vein of Josh Homme’s Dessert Sessions might be a fair comparison, but unlike Homme’s project, there’s a determined cohesiveness in this work that makes every one of these songs remarkably playable and radio friendly.

“Let It Soar” was probably my favorite track on the album, featuring a moving verse that plays out like a Nick Cave inspired indie folk song. There’s such an introspective vibe in all of the Ghosts’ tracks, but “Let It Soar” has a uniquely relatable contemplative essence that gave me the chills from start to finish. I was expecting a lot out of this release, and I mean a lot, and I actually had my own expectations eclipsed by this song, which pretty much sums up the creative persona possessed by Neil Leyton that I fell in love with to start. He’s ably supported by a roster of artists that make this release look awfully intimidating to their contemporaries, and I couldn’t be more thrilled to see this kind of success finally being embraced by Leyton’s eclectic career.

Whether you’re new to their sound or a longtime supporter of these players like myself, Lusitanian Ghosts is by far one of the most fascinating and musically dexterous releases of 2018 to date, and I think you’ll be hard pressed to find any album that will be able to contend with it by the time we reach the end of the year. This is golden material if I ever heard it, and I highly encourage music enthusiasts to check it out when they have the chance.