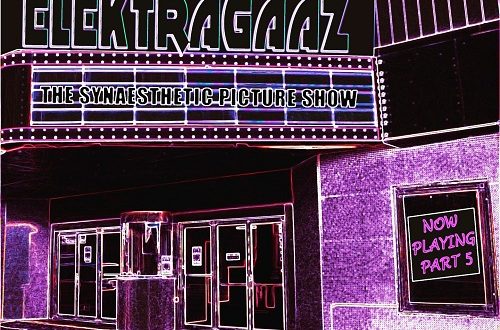 It is rare when you can write, without reservation, that a band is unlike anything else you’ve ever heard, Puffery is common. Every solo artist, band, performer, whatever, makes the claim that they bring a unique musical experience to listeners, and few can honestly say it. It’s one thing to be good, even great, but another entirely to blaze your own path through the well-trod wilderness of modern pop music. Elektragaaz’s brand of electronic multi-fusion is ideal for their instrumental thrust reliant on a surprising cross-section of instruments and the arrangements on their latest release are among the most cinematic so far in the band’s brief career.

Springing out of the New York City/New Jersey area and initially “powered” by a semi-reclusive composer known only as Poppo Redband, or just Redband for short. The lineup has expanded to include six members and incorporates a dizzying number of instruments, including relatively obscure ones such as flugelbone. We don’t hear anything like that, however, during their latest EP opener. The Synaesthetic Picture Show Now Playing, Part 5 is the latest in their ongoing conceptual series, and “Behind the Final Veil” opens it in a vibrant fashion.

It bubbles with energy. Synthesizer and other pre-programmed instruments generate much of that energy, but key components along the way add to its momentum. Blending guitar with a great sound into this fast-paced yet measured composition adds further fuel to the fire, but the song occupies unique stylistic ground. It doesn’t resolutely land in any recognizable camp and that aspect will be attractive for many listeners.

Elektragaaz draws from other non-traditional influences such as video games. Much of the spirit for the track “Manhunter” can trace its artistic DNA back to Nintendo/Atari/et al soundtracks, but it goes further. There’s more of the electronica influence so prevalent during the opener as well as a generous amount of melody to help sustain listener interest. Songs such as this will go a long way towards Elektragaaz adding to their growing following.

“Flying Underwater” will make the grade for many listeners as one of the EP’s best moments. It has a little musical sleight of hand to share with listeners as the tempo shifts during the course of the song, but its surprising moments aren’t its chief attraction. Its drawing power will likely rest on the polished and inviting aural landscape Elektragaaz explores during the song. The bulk of the cut is moderately paced and almost ballad-like in its development. That isn’t a bad thing.

Nor is it a bad thing to pull listeners in the opposite direction with the next track. “Sebastian’s Cat” is more self-consciously artsy than Part 5’s other songs, but that means something different when discussing this band. Pretentiousness customarily leaps to the forefront in such cases, but there’s texture and theatricality here in equal measure. More importantly, those attributes are kept in balance. There’s enough music here to act as a counterweight to any slide into ham-fisted attempts at meaning.

It is likely Elektragaaz has its own intent behind these songs, EP, and series. It doesn’t matter what their intent is, ultimately, because it can be interpreted however you like. These six songs glisten with energies that few other acts, any genre, can match and its depths demand multiple listens.

User Rating: Be the first one !
Share
Previous Jeremy Rice “Why Do You Lie” (SINGLE/VIDEO)
Next Jon Pozzuto “Valley of Empty Cities” (EP)