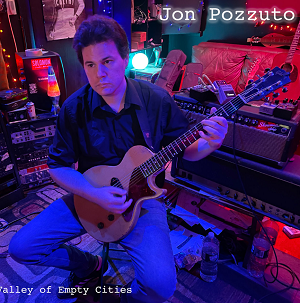 There’s something so overwhelmingly charming and invigorating about stumbling across a truly original Americana rock star. Most artists these days have thrown in the towel when it comes to crafting genuine and original music, so to find a guitar-forward EP with emphasis on lyrical storytelling and musical performance feels like a great white whale of sorts. Jon Pozzuto is no stranger to the world of music having performed since the age of 14 at clubs such as the historic CBGB (humble brag), but Valley of Empty Cities is his debut solo release and there are already so many questions on my mind. Namely, as the EP clocks in at only fifteen minutes, when will there be more?

That’s not to say that the four tracks contained in Valley of Empty Cities are meager by any means, as they all function as full musical meals back to back (to back to back.) The rock-centric artistry within every song on the project showcases a little bit of everything that makes Pozzuto shine. “Dead End Train” is a rip-roaring opening track, playing around with the age-old mythic narrative of ghost trains in its lyrics, and the chugging bass meshed with sharp guitar amps the song up for an entire four minutes.

“Dead End Train” is a perfect opener as it will grab listeners and show off just about everything the next three tracks have in store for them. “Love and Death” comes next and slows things down a tad, giving more room for guitar flair in the opening moments with a small guitar solo. The emotional core of the EP is found here, and Pozzuto having fun with his harmonies in the chorus doubles down on the overall sharp production that the project has boasted thus far.

“Cemetery Grove” rolls in with ambient rain and thunder before drums come charging in with a beautiful harmonica. The texture on this particular track feels the most lived-in, as Pozzuto (maybe subconsciously) sings with sharp vocals in the verses and a much softer affectation in the chorus. The chorus might be Valley of Empty Cities’ strongest piece, as it captures not only Pozzuto’s knack for lyrical imagery but unique harmonies.

The way he sings the back half of the line “There’s an orange grove past the cemetery that no one knows about” really stands out as a true moment of musical bliss, and the rest of the chorus maintains the same strong musical direction. The title track “Valley of Empty Cities” closes the project out nicely, bringing everything together melodically and thematically. “This used to be a forest, now it’s a sea of trash / Beyond the vacant skyline were once cities of gold / with the dying generations, the stories remain untold.”

Valley of Empty Cities balances a knack for punk-rock and Americana, something most wouldn’t attempt (and for good reason.) Thankfully, Jon Pozzuto isn’t most and he manages to squeeze something truly remarkable out of that bizarre cross-section of sounds. There’s plenty of Ramones influence leading the heavier tracks on instrumentals and vocal delivery, but within each track remains the heart of a singer-songwriter inspired by Bob Dylan and the beat generation.

The lyrics for every song on Valley of Empty Cities are Pozzuto’s ace in the hole when all is said and done, but there’s a great deal of smart genre-bending at play across all four tracks for fans to dig into. Give this EP a try, it’s short and sweet enough to make up for the number of times you’re going to have it on repeat!