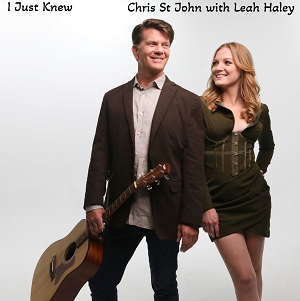 Chris St. John’s duet with vocalist Leah Haley on the former’s latest single “I Just Knew” isn’t a novelty track. Some may hear it as such when they grasp the subject matter and accompanying music video. There’s no question that St. John, Haley, and particularly songwriter Stephen Wrench, are cognizant of how appropriate this song is for wedding anniversaries or parties, but it runs far deeper.

It’s a tribute to the effect of first-class songwriting. Wrench’s time-tested talents have carried him near and far in the music world, rubbing elbows with a wide assortment of A-listers and fledgling beginnings alike, and he brings a potent mix of fundamentals and universality to his work here. Wrench has long since mastered the demands of writing compelling ballads where each strong part adds up to an even stronger whole. He’s also listened to enough love songs, past and present, and tasted his own victories and failures in that arena to mix with his craftsmanship with results virtually anyone can relate to.

“I Just Knew” illustrates first-class interpretive powers as well. Wrench wouldn’t trust his songwriting to anyone and the duo tackling this song are an inspired fit. Haley’s earthier timbre contrasts well with St. John’s much more formal singing, at least in comparison. Their interplay has a gentle tilt. It isn’t absent of emotion, however, and follows a dramatic trajectory rather than soft-pedaling the song’s contents.

The musical backing is 100% country music balladry. There’s a further authentic touch coming from the fiddle, but it isn’t omnipresent. Each fiddle line dovetails neatly into the next, much like the lyrics, creating a sense of inevitability that will keep listeners’ attention to hear if you deliver on your promise. St. John does that and more with Haley’s help. Each singer is more than capable of carrying the song on their own, but it flies higher with them together.

The video for the song caps everything off. It has every bit as much of the polish that we hear from the song. Low-key imagery befitting the lyrics is far better than attempting to make some sort of misguided “statement” and the selected font is clear, yet beautiful. The statement is the song and everything else is, in the end, an accouterment.  It is a package deal, however, and one feeds into another despite the song’s obvious pre-eminence.

It’s a given to expect Wrench and St, John to work together again. The latter shares a clear affinity for Wrench’s material and refuses to bring any ego to the proceedings. He’s there to serve the song and nothing else. Haley has a similar attitude; both singers know how to assert themselves in just the right amount to push the track’s urgency. It’s hard to handle the two of them handling the songs any better than this.

“I Just Knew” is a win-win proposition for anyone. Newcomers will be impressed by every facet of the performance while longtime fans of all three principles will be reassured by their continued skill. Stephen Wrench has been around for years and he’s not going anywhere, but St. John and Haley bear all the hallmarks of an artist capable of equaling such staying power.