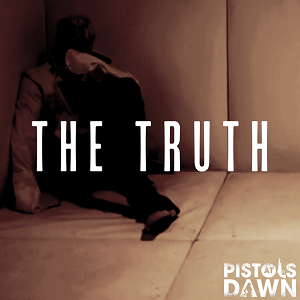 Pistols At Dawn “The Truth” (SINGLE/VIDEO)

Atlanta-based rock group Pistols At Dawn have never felt more at home than they do on their latest single “The Truth,” which also acts as the lead-in for their upcoming fourth album Ascension (their first full-length in five years.) The band, a quintet comprised of Adam Jaffe, Devin White, Billy Sullivan, Tommy Richardson, and Cris Hodges, is only a year removed from their last project, the Nocturnal Youth EP, but there’s something undoubtedly new and fresh residing within “The Truth” that the band had yet to crack. It could be the return from the edge that came with 2020’s lockdown, where their EP was created, or it could just be a new burst of creative energy; whatever the case, Pistols At Dawn has never sounded better than they do on this latest single release.

From its very first few seconds, “The Truth” is an explosive return to the studio for PAD; amping up the shredding guitars and thunderous drums are the first thing on the docket before vocalist Cris Hodges comes in with his signature vocals: “Every morning I wake up afraid, away from the light. Sometimes it’s hard, but believe me – I’m here for the ride.” Talk about an attention-getter, right? The single isn’t afraid to tackle heavier subjects straight out of the gate, something Pistols At Dawn is familiar with, and the music video that accompanies the single release features Hodges arguing with another version of himself while detained in a straitjacket. It brings the subtext of the song’s subject into the light and makes it as clear as day.

The overall production value on both the song and the video are marvels in their own rights, as most artists don’t do music videos these days in general, let alone effects-heavy ones that feature the band playing in the middle of a giant dust storm and tornado. It’s honestly super refreshing to have a band on the scene that seems to understand the importance of a quality music video and not just promotional TikToks. With every new release from PAD, there’s a noticeable attention to detail and a well-intentioned project rollout, and that alone is worth recognizing.

As a lead single, “The Truth” is an impressive first taste of the new Pistols At Dawn album — functioning as one of the eight tracks off of Ascension, there’s still plenty to chew on when it comes to the album’s release in August. There’s a noteworthy ‘90s alternative tinge to the single when put up against the band’s earlier work, and the comparisons between PAD and some true industry titans wouldn’t be out of place after this release. As the band transitions from what they’ve done before to where they’re going from here, there’s a lot of open, unmarked road ahead of them. It’s safe to assume “The Truth” is only a taste of what’s to come, and after not having a full album release in five years, it’s also safe to assume that Pistols At Dawn has a lot to get off their chest.