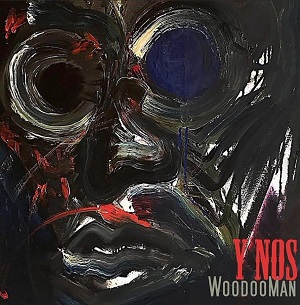 If you’re looking for something that sounds and feels fresh, but with a dash of nostalgia, look no further than “Y Nos,” by Welsh Rockers. WoodooMan. It’s the 8th studio album for the band, who have been called a mash-up of Psychedelia, Underground and Stoner-Punk. The group’s founder is Iwan Ap Huw Morgan, who himself has been compared to vocalists such as Mark Lannegan and Nick Cave. The most outstanding aspect of Y Nos may be that the album is not without a soul. It’s a diverse collection of songs, with several standout moments that give the record both definition and gravitas.

Grunge-flavored guitars open “Dust Again,” the second track on the album. This is the type of song that shows just how seasoned that WoodooMan are as songwriters. A rather crafty composition, the vocal arrangement featuring a seamless tradeoff between Morgan and Kate Wood stands out. If the band chooses to officially release a single, “Dust Again,” should be a strong contender. The theme of this one is presumably life and death, and how we will end as we began; dust.

“Father Sun,” gives us something to dance to, proving that WoodooMan is capable of more than simply brooding. The story centers around isolation and tragic love. You’ll find yourself moving to this one, voluntarily or not. “Across The Mists Of Time,” hears WoodooMan quickly revert back to their roots. An ELP/King Crimson inspired synth riff opens, what is a relatively straightforward piece. There’s an illusory element to this one that is captured both sonically and lyrically.

Speaking of synth , “All Night Long,” boasts some of the most impressive work on Y Nos. This not quite settled piece, lures us into its subdued lunacy and standoffish anxiety. “All Night Long,” gives off an aura of emotional complexity and even a slight sense of danger. “On This Train,” could have possibly benefited from a slightly “brighter,” mix. It’s a solid track, but ultimately comes off a bit underwhelming, due to a low mix. It’s quite possible that’s what the band was going for, as the track still manages to be a catchy one. The rhythm section really cooks on this tune.

The curiously delicate “In The Night” is a bit of a departure from the rest of the album in terms of mood. It’s worth noting, just how effective WoodooMan is at capturing the ambience of a moonlit night. There are many references and nods to the vespertine way of life on Y Nos, and “In The Night” is a definitive piece in that regard. It’s only fair to point out just how prolific of a group that WoodooMan has become by now. From his meager beginnings as just another punk rocker with a guitar and a perspective, Morgan has carved out a nice place for himself in the annals of his amalgamated genre. Y Nos is another solid outing from the Welsh natives, as they continue to create great music and intrigue as to what comes next.