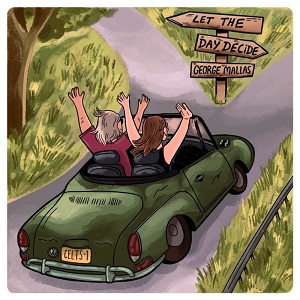 Pop music doesn’t have to be complicated and, truth be told, it’s often a lot more fetching when it’s presented simply as opposed to with a lot of frills. There are plenty of singer/songwriters who might disagree with me on this point, but if there’s one who is sympatico with the sentiments of this statement, it’s George Mallas; in his new album Let the Day Decide, Mallas is leaning on the melodies as opposed to the machinery, relaying emotional commentary that comes from the heart first and foremost. His diction is impressive, but more importantly, his verses feel entirely genuine and to the point.

All of the magic in Let the Day Decide starts with the harmonies, whether they be simple ala “My Beliefs / The Prayer” and “Shine” or a bit more intricate in the title track, “It’s Lost,” and “Chasing Rainbows,” and this can be credited to the delicate vocal of our singer without question. He’s got quite the limber delivery, but more importantly than this, he’s able to construct so much more here through minimalism than he ever would decadence. He’s using a lack of sonic depth to emphasize his poeticism, which isn’t very common in his scene, to say the least.

Rhythm is a significant contributor to the narratives in this record for sure, but it’s all the more meaningful an element to behold in tracks like “Go and Behold,” “For Love,” and “Don’t Walk Away (Dragon Song).” These songs give us a good concept of how important using detail to express himself is to this player, and I would argue that for what they collectively share aesthetically they also tease a sense of experimentalism that has the potential to do a lot for this artist’s career as he gains a little more footing on the mainstream end of the market.

I really like the natural feel of this material, and I would even go so far as to argue that it makes it even easier for this vocal to slide into the bigger melodies seamlessly. There’s no pushback from the beat in “History” or “Your Name” – it’s all hook and harmony from the get-go, which allows for Mallas to cut out the aggression a lot of other pop singers have to employ when making this kind of music work. He was born to step up to the microphone, and while there’s still room for growth, what we’re getting in these performances is ace to put it quite mildly indeed.

Simple but still a lot more vibrant than some of the other content I’ve been hearing from the same genre lately, Let the Day Decide is an immersive effort that is certain to stoke a big reaction out of pop fans this summer, if not everyone who has a taste for the melodic wonderment coming out of the American underground at the moment. This is certainly an exceptional release on all fronts, and hopefully just a glimpse into what this singer/songwriter will produce again in the future.