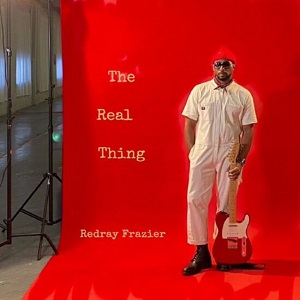 You know when people make music for more than just fame and fortune. It’s as much of a cliché as anything else in this world to say some people possess the still relatively inexplicable compulsion to make music and share it with the larger world. Being a cliché doesn’t make it any less true. Cats such as Redray Frazier aren’t plotting out their eventual endorsement deals, transitioning into film roles, or making sure they are seen at all the right places. It’s the songs that they are worried about because they are cleaned out of them, not toss-off confections, and even the tracks celebrating life in some overt way are paid for in more than cash.

His latest single “The Real Thing” shows a lot of things. One of its biggest demonstrations is revealing the all-encompassing commitment Frazier holds to realizing his musical potential and entertaining his audience. You can hear his love for music in every second of the cut, it’s in his DNA, and he’s immediately convincing as a result. Listeners will love how he modulates his voice from one portion of the song to the next depending on the demands of a particular passage. It’s a thoughtful yet passionately physical performance.

Physical without ever being obvious or crass, as well. There’s a fair amount of double-tracking of his voice but, for the most part, Frazier’s voice stands on its own with minimal assistance. It has first-take spontaneity rather than something he belabored to death and there’s audible fun you can hear with the way he comes up on certain lines. The production does a fantastic job of integrating the music and vocals with one another; it may bear his name alone, but “The Real Thing” never sounds like anything less than a band performance.

That’s great considering how some of the instrumentation is electronic rather than human driven. Any electronic qualities in the performance though elude the standard pitfall of sounding sterile and uninviting; “The Real Thing” never fails to sound anything less than warm and enveloping. It doesn’t have any sort of claustrophobic effect, however, as Frazier’s voice in the center of it all inspires confidence in listeners and never sounds overwrought. He’s the undoubted star of this performance.

It’s a testament to his understanding of the song, however, that he never dominates the track with too heavy of a hand. Instead, his presence bristles with personality from the first syllable through the last, and the assorted twists he unleashes on listeners are uniformly entertaining. He’s been doing this a long time now and it’s a further testament that he’s grasped so many of the lessons about what audiences are looking for while never losing his grip on what makes him the musical artist that he is.

Hearing this sort of rigorous self-honesty is one of many reasons to keep listening. Redray Frazier’s music stands for what it is and would never pretend to be anything it is. Released on the New York based indie label Greystone Music Group, “The Real Thing” positions Frazier for great things during the second half of 2022.