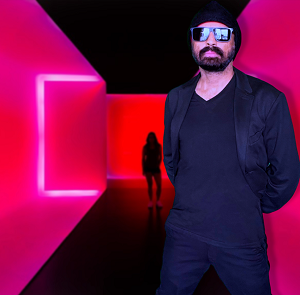 Vineet Singh Hukmani understands his audience like few pop performers today. He’s had one success after another during the comparatively dark period of the pandemic at its zenith and all of its accompanying lockdowns and, without question, performed a service to music fans worldwide with his relentless optimism and hope for a better tomorrow. He’s also served us well by crafting memorable music thrill rides that have carried listeners far from the clatter and chaos we’re still experiencing in the world today. His new single “Dee Da Da Da (Live Is Your Game)” is one of his finest works of pop songcraft yet and shows a musical artist whose compositions are growing more and more effective with each new outing.

He has a sharp instinct for song length. “Dee Da Da Da (Love is Your Game)” never bites off more than it can chew The synthesizers and electronic percussion keep things percolating at an energetic clip and you can feel Vineet feeding off that energy. He keeps everything in balance though. The arrangement never threatens to overtake his vocals and Vineet’s singing allows the music room to breathe. There’s a smattering of double-tracking present in the performance, but it isn’t exaggerated. Vineet’s voice is strong, and the double-tracking reinforces it well.

The lyrics are straightforward and conversational. He isn’t trying to remake the world or deliver poetry set to music but rather communicate a situation we all know. The song’s universality is an enormous reason for its success and Vineet gets that over with listeners without ever seeming to strain for effect. The song title is familiar, in some ways, pop music history is rife with such examples, but the metaphor in the heart of the song is Vineet’s own. It’s not hard to imagine the song title will catch many people’s eyes and they’ll have no difficulty relating to the song’s point of view. We’ve all been there.

It’s a great fit for a pop song. The video emphasizes the fun and breezy nature of the track, despite the rueful longing in the lyrics, and the video does as well. Vineet has brought an intensely visual quality to all of his preceding work, and this is no exception, but he’s gone a step further this time. The lustrous colors of the video are never too much for viewers to deal with and the traditional structure of the clip is excellent for the song. The women involved in the video are well-chosen, as well, and increase the clip’s appeal.

The year is a little more than half over, but you can be certain we’ll be hearing from Vineet again before 2022 concludes. He’s on fire right now as both a performer and writer and clearly boasts the personality needed to strike while the iron remains hot. “Dee Da Da Da (Love Is Your Game)” is an entertaining overall package that audiences will connect with and it’s likely destined to earn Vineet Singh Hukmani a bevy of new admirers. There’s plenty to like in his past work and the new single has near-instantaneous appeal.