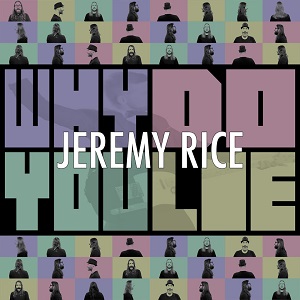 What you put me through, what happened to you, sings the smooth and pop star Jeremy Rice in the new earworm “Why Do You Lie”. Toe tapping and one of the summer’s sure-to-be-hits, Rice keeps his attitude fun and free despite the inferred relationship woes. Featuring a rousing pop rock music bed and Rice’s crooner-worthy vocals, “Why Do You Lie” is from Rice’s album, The End Of The Highway. He’s also released an exuberant, pop-art heavy music video. Rice’s star continues to shine and this latest single and companion music video further showcases this Quebec, Canada artist’s exceptional talent.

Rice opens the single with quick French-sung lyrics. He weaves the lines effortless and his gregarious personality rises to the surface. The music bed is rocking – with a blend of classic rock sounds and top-notch pop rock blends. I think during the first few measures of the song I was struck by the sheer fun happening between the vocals, the guitar, bass and drums. This song really sounds like a real band giving it their all – and not some fabricated studio (overly produced) concoction. There is something so refreshing about the honest vocals and the way that Rice lets the listener know he’s had it with this particular relationship. He has a great attitude about it and doesn’t rest on his laurels. He’s moved on and loving life – you can feel that in the tones and the overall vibe of “Why Do You Lie”.

The tempo reminds me a bit of “Shut Up And Dance” from Walk The Moon. In many ways, too, the pace of the song lends itself to being that song you crank up the sound in the car. Windows down and ready to take on the open road. There’s something very embedded into the music of “Why Do You Lie” that feels like Rice is allowing the listener (and sharing his own story) to leave things in the rearview mirror. He acknowledges this particular chapter in his life and he’s more than keen to smile about it and just shrug.

The guitar work is solid, with a blast of intricate arrangements that feel neither too stuffy, nor too complicated to be standoffish. The guitar work is quick enough too, where you don’t feel drowned in ‘an expected insert guitar solo’ moment. It feels organic and not forced. The same can be said for the rhythm section – both the bass lines and the drum work are loose and catching. Again, you really feel like you’re immersed in a band song – not a song patchworked together in a studio.

In the music video, an array of pastels and Andy Warhol-inspired color blocks, the visuals definitely match the vibe. I loved how the video isn’t cheesy, but a bit of a throwback to 80s colors and tones. I think once again, the personality of the band is on full display and they make the listener and viewer feel completely entertained. Rice has that zest – that extra something that can’t be denied.