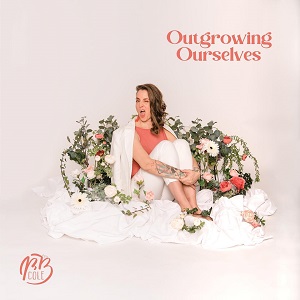 Anyone who says they had a great country-rock album coming out of Austria on their 2022 bingo card is lying. Labeling B.B. Cole’s Outgrowing Ourselves as country-rock alone, however, is misleading. Her singer/songwriter sensibility shines through during each of the album’s nine songs and there are glimmers of other influences catching the ear throughout this release. There is a wealth of emotion underlying these songs, as well, and they are far from one note. Humor playfulness and pathos exist side by side in many of Outgrowing Ourselves’ tracks and the songs are topped off with satisfying maturity.

“She Gives Me Feathers” serves notice that she has an unique lyrical voice. Cole writes about her life with a matter-of-fact directness and intersperses that style with flashes of a broader poetic consciousness. This is a debut album – she shouldn’t have such poise. Perhaps it is no surprise when you consider, however, that she’s had a little over thirty-five years to ready herself for this moment. She has excellent collaborators serving her at each position and they help weave this track into an all-encompassing musical experience.

“Emotional Baggage” fires away from the first with easy going country-rock flair. Cole peppers the track with recurring flashes of slide guitar that brings much needed grit to the proceedings and there’s a well-handled bridge in the song’s second half. It underlines the song’s potential as a live number for Cole. “Some Kind of Religion” may be the album’s only ballad. It isn’t your run of the mill ballad, however, as the lyrics reveal a side of Cole the previous tracks never uncovered. The relaxed guitar strum present during the song accentuates its stripped-down qualities.

“Pieces of Me” has more of an acoustic touch, but otherwise will remind many of the earlier “Emotional Baggage”. It’s an interesting variation, however, thanks to another winning Cole vocal and well-written lyrics. Playing with the tempo of “When I Was a Little Girl” provides an excellent counterpoint for the shuffle arrangement steering much of the song. There’s a narrative suggestiveness in the song, never linear, but it sketches out the shape of a life many will recognize.

“Wear Your Crown” is much closer to rock than anything preceding it. The rhythm section gives the song a larger foundation than those before it, but it’s hard-hitting without ever sounding leaden. Her vocal is emphatic without ever bleeding into overkill and she locks into the song’s swing. Cole closes the album with “Tears + Fears” and it’s hard to imagine any listener not experiencing a measure of shock hearing the song for the first time.

You won’t miss the lack of instrumental backing as Cole’s unaccompanied vocal has a gorgeous melody to hang its hat on. It’s a shrewd move to sub well-chosen sound effects for traditional instruments. Ending the album in such a bold way makes it clear B.B. Cole will be back with a sophomore release and remain an artistic force for years to come. Her staying power is obvious in every song.