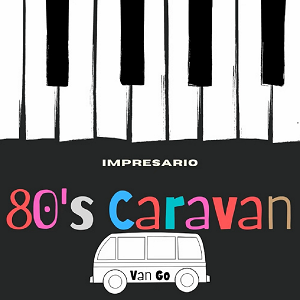 Impresario’s fourth full length album in a little more than two years, 80’s Caravan, may prompt listeners to question if the opera singer turned pop songwriter Valerian Ruminski is overstretching himself. The ten songs included on his latest album, however, never betray any signs of fatigue. It’s the latest burst of creativity first finding flower as a way of coping with and working through the pandemic, but March 2020 is receding fast. It’s clear with each new release and song that Impresario has discovered something far different than a mere side-project. The ten tracks on this album are alive with passion.

The occasional throwback spirit of the album isn’t any bother for me. I am a child of the eighties, thoroughly steeped in the music of that era, but it makes my standards different. “When I Asked the World for Love” scores with me in several ways. It isn’t a huge part of the overall track, but I found the quasi call and response between Impresario’s voice and the supporting singers around the song title is a nice turn. It isn’t fancy, but effective.

The juxtaposition of such strong voices with the electronic backing is another part of the song that appeals to me. He does an excellent job of placing each on equal footing and it establishes a model for the album going forward from here. It’s an excellent introduction for Impresario’s newcomers as it serves up perhaps his most agreeable musical face while remaining true to his artistic vision.

“80’s Caravan” expands on that vision. There’s a much stronger narrative supporting the title song than we hear in other Impresario tracks. The vocal melodies of this release are far above average, an aspect of the collection that may not get much coverage, but the title song has a vocal melody that seems to cascade out of Impresario. Additional vocal touches are well-chosen and deepen the song.

Glistening piano runs distinguish “Hot, Hot World” from the pack and stand in stark contrast to the song’s subject matter. Kudos to Impresario for discovering a way to write about a topic such as climate change without ever leaving the listener feeling like someone just clobbered them over the head with three minutes of dogma. Another track with a strong social consciousness is “Here We Go Again” and its surging virtual chorus of vocals reflects the sense of exasperation and indignation bubbling below the song’s surface.

The vocal arrangement is once again the star for the late album track “Over and Over Again”. It’s obvious Impresario doesn’t churn out these tracks and, instead, takes great care crafting the best possible performance. Nowhere is this more evident, however, than during the album’s conclusion. “I Wanted To Love You” strips away virtually any semblance of pretense and allows Impresario to present his musical art at its most unadorned. His vocal is, for me, the finest performance he gives on an album full of them. It closes his fourth album 80’s Caravan in a wonderful way.