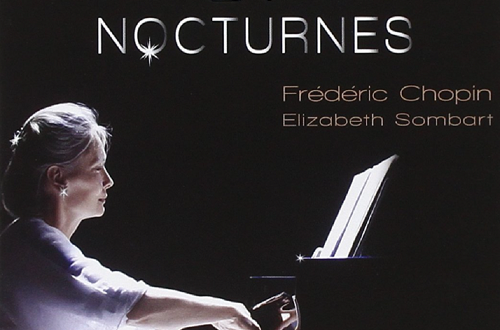 The album’s twenty-one pieces are composed by legendary classical composer Frederic Chopin. Sombart’s interpretation of the venerable Polish pianist’s work maintains consistency of mood and playing alike. Her long experience and training give each of the twenty-one performances carefully modulated eloquence. “Op. 9 No. 1 in B-Flat Minor” has ample melancholy but Sombart’s playing never overemphasizes these elements; the track, instead, is full of seamless transitions from one motif into the next.

Singing the Nocturnes’ third performance “Op. 9 No. 3 in B Major”, has a distinctly more playful edge. Chopin’s wont for one memorable melody after in another nestled within compelling musical structures provides Sombart with a bounty of riches. She has the necessary chops to exploit each one. The next three tracks continue exploring major keys and Sombart’s deft touch on the keys is critical to its success. Some may find fault in Chopin’s willingness to remain in a major key for so long,

The pieces vary between four and eight minutes in length. These relatively brief lengths give the compositions and her playing urgency. It doesn’t come at expense of fully realized musical ideas, however. “Op. 15 No. 3 in G Minor” is one of the meditative highlights of this release. Its slowly developing melodic elegance receives an almost gossamer-like treatment from Sombart; the sensitivity of her playing is exquisite. Chopin’s compositional discipline shines here.

“Op. 27 No. 2 in D-Flat Major” juggles alternating currents of light and shadow. Sombart’s skillful attention to balance pays off here as she’s able to seamlessly shift between the two without ever arresting the momentum of the piece. The production for this album does an excellent job framing her playing in the best possible way; it invests Sombart’s piano playing with the necessary warmth, yet they are never over-prominent.

She opens the Op. 32 compositions with “Op. 32 No. 1 in B Major”. There are assorted dramatic notes slipped in throughout the piece but, for the most part, this is another of the more playful moments on the release. You hear it in the light melodic presence defining much of the track. The haunted beauty of the later “Op. 48 No. 2 in F-Sharp Minor” will rate as a peak point for many in the performance. Sombart’s talents with unusual keys such as this sets her further apart from more workmanlike and limited contemporaries but, in the end, it’s Chopin’s brilliance burning even brighter.

These are outstanding compositions reminding us, if we needed it, of Chopin’s greatness. Sombart demonstrates the same affinity with this material as she did with Beethoven and others; she is a bit of a chameleon capable of moving throughout the classical canon with few, if any, restrictions. Singing the Nocturnes is, arguably, her finest release yet.

User Rating: Be the first one !
Share
Previous Ian Bouras “A Cure for Reality” (LP)
Next Jonmosslol “BE ALRIGHT” (SINGLE)