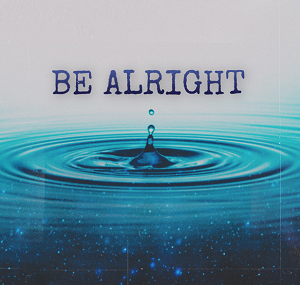 Jonmosslol (the “lol” stands for “loneliness over love”, not what you were initially thinking) taps into a particular raw place with his single “BE ALRIGHT”, an aggressively titled song that upon listening to, you realize the spelling might be more indicative of a calming command versus an over enthusiasm. One look at the Spotify banner of Jonmosslol tells you a lot, he certainly comes from the Adult Swim/Toonami generation, late nights sat in front of a warm TV, awash in the feelings of fiction and yet, he’s obviously had a rich life thus far to be able to pull from to craft a track this atmospheric.

Admittedly, while the lyrical content can be a little repetitive, and for some I think it could be a little surface level, the vibe and aesthetic this track has is wildly refreshing and even surprising in many ways. Lol’s voice has this somber but firm cadence, certainly someone who’s pouring himself into this vocal performance which isn’t demanding on an octave level, but one from an emotional one. “I don’t really wanna live/I don’t really wanna die/I just wanna be alright” is a very standard line, but in his delivery it feels like daggers cutting through you. Naturally something that’ll make this song’s content even more relatable is the youth who’ll connect with it, it’s practically begging to be used as a soon to be iconic “TikTok” sound.

The bedroom pop hip-hop beat is steady, and the production is charmingly home grown. Despite how unsure and sad Lol sounds, there’s a real confidence to his work, especially on this track. He doesn’t feel like a novice and his flow and bars are excellent matching the beat he’s crafted expertly. What truly caught me off guard however, was the turn it makes to an almost Jaden Smith/N.E.R.D. rap rock song with the introduction of its emotive pseudo guitar reverb and drum line. It’s a pretty experimental combination that only enhances the song as opposed to making it feel like a jarring pastiche.

There’s a few lines that might come across as groan inducing, and there’s tons of lines that I thought were clever and inspired (specifically a punchline involving sequels), but this is a song that I think is meant to connect with the rawest moments. It’s not superfluous and there’s a weight attached to it that you know means a lot to Jon. The way the vocals cut out for the last third of the song and you’re left enveloped by the staggering instrumental, you feel truly swept away, there’s almost a ghostly euphoria to it that becomes melancholic as it ends.

Jonathan doesn’t have any concrete answers as how to feel alright, and in this growing and confusing world, who does, but it’s a song meant to connect with the other outsiders and the broken hearted just trying to fight through to the next day and I think it ranks amongst the best of Jonathan’s work. It’s now currently streaming on Spotify.