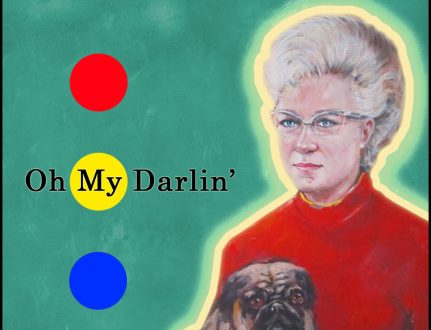 Surreal soundscapes that demand as much of a reaction out of us through the texture of their melodies as they do the substance of their soulful lyricism. Guitars that ache with the pressurized wonderment of youth. Basslines that bleed out of our speakers and drown everything within earshot. Percussion that staggers but never stumbles into irrelevancy. In Oh My Darlin’, jagged fragments of a concept album are reassembled with sonic superglue by the one and only Streaking in Tongues, and while you could make the argument that the colorful portrait these shards form is steeped more in avant-garde experimentalism than it is folk music, its visceral harmonies – whether they be those of “Fear of Limbo,” “Sure as Heaven,” “Irrational Blues,” “I’m Gonna Love the Hell out of You” or “Inside out and on My Ass” – will appeal to fans of both genres just the same. Oh My Darlin’ is the most profoundly expansive record that Streaking in Tongues has ever recorded, but for as lofty an exhibition piece as it incontrovertibly is, it’s got the stylishness and elegant prose of something unembellished and, more importantly, totally organic.

This album feels like the true sequel to Kindergarten Prayers in more ways than one. The noise rock flirtations in “We’re Still Gonna Be Alright” and “Sunlight of a Thousand Babes” expands upon the blueprint of cornerstone tracks like “Field of Pineapples,” while other acoustic jams, like the Silver Jews-esque “I’m Gonna Love the Hell out of You” and “Wait Wait Wait Wait Wait for Me,” push the hybridity of KP’s balladry to the very brink of experimentalism.

There’s a steady flow to the music that feels almost progressive in nature, but I don’t know that I would deem Oh My Darlin’ an actual concept album; contrarily, this is a collage piece that is familiar enough to make longtime listeners very excited whilst being evolutionary in its minimalist design, and moreover, the efficient execution by its players. “Irrational Blues” is brooding, “Nothing Quite Like It in the World” is uncompromisingly emotional, and even the sixty-eight second “My Single Wife” has more to say than most Top 40-charting singles have in recent memory.

I didn’t know if they were going to be able to top the majestically postmodern tour de force that was Kindergarten Prayers, but I am happy to report that Streaking in Tongues’ Oh My Darlin’ is every bit the refined successor most critics (myself included) had hoped it would be. The acoustic lo-fi charms of Daniel Johnston live on through the cuttingly balladic melodies of “Screw Up,” and though there are plenty of other impressive likenesses that could be made with this tracklist, there’s no mistaking just how original an artifact this album is from beginning to end. I’ve come to appreciate just how involved every release Streaking in Tongues attach their fabled name to is through the experience that these songs have afforded me over the past week, and after you give it a complete, uninterrupted spin for yourself, I think you’re going to be just as impressed as I was.

User Rating: Be the first one !
Share
Previous Lesibu Grand’s The Legend of Miranda
Next Barcodes