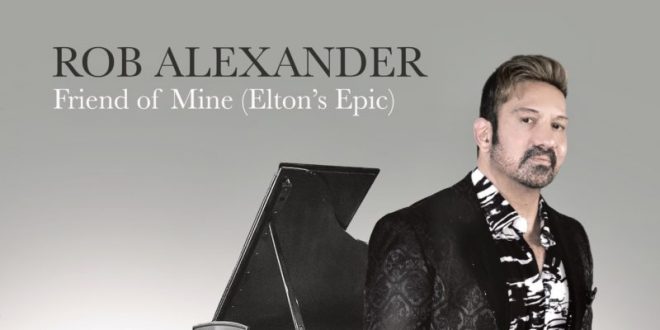 Exotic, surreal and subtly a driving force behind every stitch of audio that we’ll hear in the five minutes “Friend of Mine (Elton’s Epic),” the new single from Rob Alexander, will play, the piano keys that stretch their melodies out through our speakers in this second cut from Alexander’s Being Myself record are cuttingly sharp and impossible to miss at any volume, but they’re surprisingly not as loud in the mix as one would think they’d be. For Alexander’s purposes, they don’t need to be larger than any of the other elements are; in this symphony of pop, even the most dominant of components are made equal in the sway of the band.

You don’t need to have any knowledge of the backstory to this track to appreciate the narrative it has to share about Elton John, but if you were looking at it through the lens of its poetic lashings exclusively, you’d be hard-pressed to find another track in the Rob Alexander discography quite as passionate in tone. From the way he attacks his lyrics to the means in which he sews them together in the build up to the chorus, his heart is in this song through and through.

As far as the production quality is concerned, “Friend of Mine (Elton’s Epic)” is sparkling with polish, though I wouldn’t go as far as to say that it uses its impeccable shine as a means of glossing over compositional issues. The cosmetics are a good match with the substance of the music here; true, there is a lot of varnish on the chorus, but most of it is required to accentuate just how smoky a harmony it’s boasting. Some might have done it a little differently, but for Alexander’s sound, it’s a perfect match.

Had the bass parts been minimized more than they were in this master mix, I don’t think there would have been as much of a grind in the interplay between the vocal and the drums. This might not have been the worst thing in the world from an aesthetical perspective, but I wouldn’t want to change the structure of this track anyway – if Rob Alexander behaves anything like his sound would suggest he does, he already exhausted the other creative avenues with this track well before he decided to go with this version, as would any professional singer and songwriter with a penchant for perfectionism.

It’s not the most eclectic he’s ever sounded (though it sits beside some songs that might qualify as such on Being Myself), but Rob Alexander’s “Friend of Mine (Elton’s Epic)” shows a lot of continued development that this artist shouldn’t just be proud of – he should be making an entire career out of it. While Long Road Coming Home might have laid out the blueprint for his style of play, tracks like this one give us an idea as to how much Alexander can get done when there’s nothing and no one to get in his way. He’s doing everything right here, no matter what angle we’re listening from.

User Rating: Be the first one !
Share
Previous Flat River Band releases new album Every Dog Has Its Day
Next Ryan Rosoff